Students Find Themselves Digging Out After Two Huge Storms 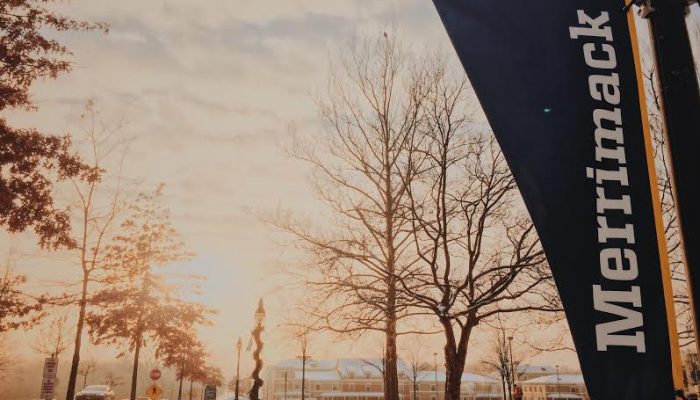 Mother Nature dumped almost two feet of snow on the area over the last few weeks and crews at Merrimack had to keep up with it in order to clear the campus and make it safe. As expected, one of the biggest challenges was clearing Lot K, which is designated for resident parkers.

The second storm in the series ended midday Monday, Feb. 13. Students received an email from the Communications Office just after noon on Tuesday asking them to remove their cars from Lot K by 5p.m. so crews could plow.

Junior Joanna Gormley wished they would have sent the email out a little sooner. Like others, she found herself crunched for time digging out her car and moving it between classes and work.

However, Gormley thought the college’s snow removal process was a success.“I think that they did the best that they could considering the circumstances.”

Some students wondered why it took facilities a full day after the storm ended before they touched Lot K. Spokesperson Jim Chiavelli says that the reasons behind this included that some students were not on campus to remove their cars, administration did not want students going out in the storm on Monday to free their cars, and other parking lots on campus were still being cleared until then.

“There is no schedule that works for every person at the same time,” said Chiavelli. “But Merrimack crews work hard to provide the quickest service for the greatest need and to help every individual as quickly as possible within that framework.”

Junior Michaela Casey was one of many students who faced trouble getting her car freed from the snow in Lot K. She opted to call MCPD who sent someone over to help her push her car out. “We all have experienced worse winters in New England and should expect some degree of frustration when dealing with the snow,” said Casey.

Gormley also recalled a worker who offered her help as she dug out. The college encouraged all student parkers at Lot K or East Mill to call the police with any questions or concerns while freeing their cars.

“The college is very proud of the women and men of the Police Department and Facilities who put in extra effort to keep campus safe and to clear snow after this set of storms,” said Chiavelli. “As well as, of course, residence life staff, Sodexo workers, and all others who came in during trying conditions and served Merrimack students.”

According to Chiavelli, the Merrimack community was, for the most part, cooperative in the efforts to clear campus. “The vast majority of students were able to move their vehicles; however, approximately 20 vehicles were not moved. We decided we would not tow, but that meant plows could not clear the entire lot.”

The East Mills parking garage complex clearing was delayed even longer than Lot K at the request of students who park there and needed more time to move their cars. The owners of the garage asked that students moved their vehicles from their upper deck to the lower deck for a period of time to allow them to clear the upper deck where students park. Chiavelli said that the owners were understanding in delaying the process for students.

As for other parking on campus designated for commuters, faculty, and visitors, few spaces were lost. “By our best count, we lost fewer than a dozen spaces due to snow,” said Chiavelli. “Most of the snow was either moved off campus or pushed onto grass or other non-parking areas.”