Home > News > Student to Intern at NASA This Summer in California

Student to Intern at NASA This Summer in California 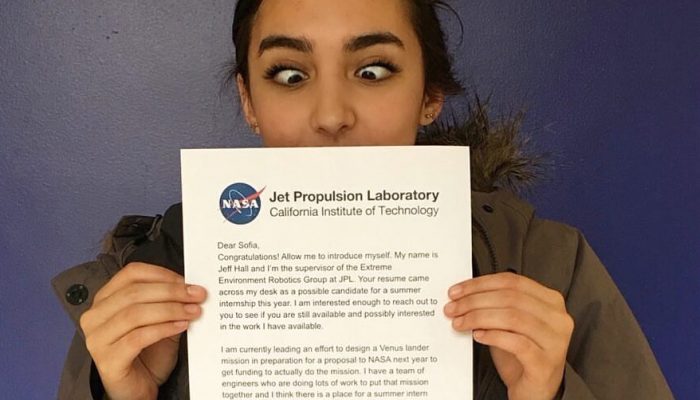 Sofia Basauri, a student at Merrimack College recently landed an internship with NASA.

Ever since she can remember, Basauri has been fascinated with space. “At the beginning of this year, after an astronaut movie marathon with my friends, I became infatuated with the idea of deep space exploration. When my dad heard about my latest interest, he brought up the potential idea of working for NASA. I thought he was crazy, but after some research I found a branch of NASA in Pasadena, California, which is somewhat close to Oregon, where I live. I applied online through the Jet Propulsion Lab program where I filled out surveys, turned in my resume and transcript, and answered countless questions. A few weeks later I was contacted by Dr. Jeffery Hall and he informed me of the great news. I somehow landed the 10-week internship!” said Basauri.

While some of Basauri’s work days will be filled with going on coffee runs and getting copies, she will be helping with the Venus 2020 mission. Her boss is an engineer involved in designing a landing mechanism for the mission. Basauri will be the the Extreme Robotics Division’s intern.

“My day to day tasks will include crunching numbers, designing multiple versions of parts on a computer program, and taking in as much knowledge as my amazing mentors can give me. Overall, I will be collecting a lot of data, designing parts for different situations, and making sure the rover can handle any worst-case-scenarios that we can throw at it,” said Basauri.

As a Mechanical Engineer major and student-athlete, Basauri has a lot of commitments. Often times, her days can be overwhelming, but her professors, teammates, friends, and family are very supportive.

When asked where she saw herself in her career five years from now, she said, “With a degree as broad as mechanical engineering, nearly anything is possible. With this internship, my interest in aerospace engineering has rocketed (pun intended).”