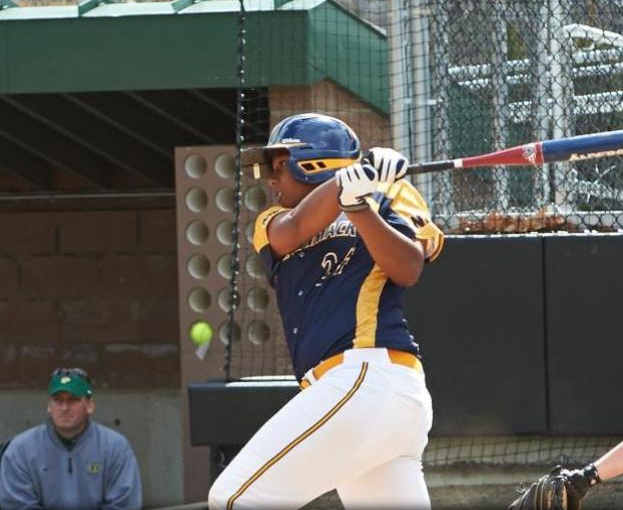 Merrimack softball won both of their games on the road against Sacred Heart on Saturday, March 27. The Warriors dominated the first game by a score of 5-0 and the second game was won 3-1 in their favor.

In the first game, Sophomore Courtney Lanpher tossed a complete game shutout for the Warriors, retiring five Pioneers and only giving up three hits.

“I felt good on the mound and was really confident in our defense,” said Lanpher about her pitching performance. “Even when I was behind and had to pitch to contact I knew they would have my back and make the plays.”

She had the support of the Merrimack offense, who tallied 11 hits resulting in five runs. Kelly Dovi led the charge and went 3 for 4 with two RBIs.

“I felt very confident on the mound when we had the lead knowing that we were ahead by multiple runs.” Lanpher added.

The second game also had its own share of excitement. Sarah Reisler rocked an RBI triple bringing in Tiffany Mangiameli. Abigail Amato squared up her third home run of the year to left field in the top of the fourth inning, a two-run shot to make the game 3-0 Merrimack. Sophomore Katelyn Tompson lasted the entire game on the mound, striking out five while keeping her team in the game. She ended up getting her first win of the year, only allowing one run and four hits.

The Warrior’s Also played two home games after these two wins at Martone-Mejail Field against the Saint Francis U Red Flash on April 2 and 3 with double headers on both days. Unfortunately, the Warriors lost all four games. They then played Sacred Heart again at the Pioneer’s home field in Fairfield, CT, on Wednesday April 7 for a double header. They again lost both games.

Hopefully things turn around for the softball team as there are plenty left in the season.