Home > News > Social Justice Month is Full of Events, There is Still Time to Attend

Social Justice Month is Full of Events, There is Still Time to Attend 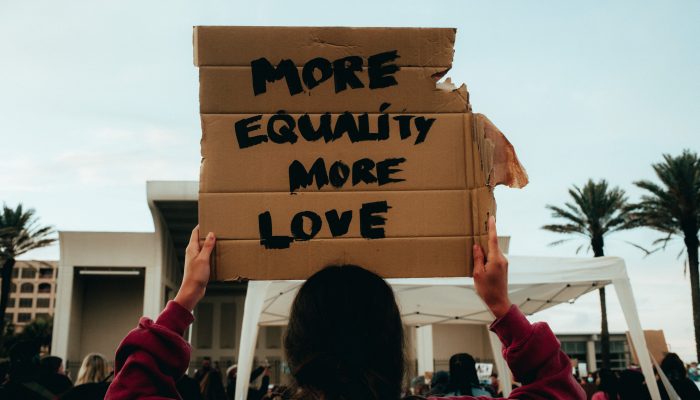 Within the first full week of April, over 2,000 students already attended numerous Unity in Diversity events as part of  Social Justice Month. Merrimack’s Diversity, Equity, and Inclusion Initiative follows the hundreds of years of unjustified discrimination and oppression towards minority, LGBTQ+, disabled, and female populations in both the U.S. and around the world. While we will only highlight a few events here, bear in mind that different events were held every day throughout the month.

At this event, Dr. Jasmine Khamis told her story as an Arab-American woman. Khamis works as a counselor while also teaching at Merrimack. During the event, she spoke about her struggles growing up in a predominantly white community and feeling as if she didn’t belong. She explained how she came to feel ashamed of her culture and felt as if she had to conform to the behavior of the majority. A predominant influence in her life was her father, who had always stressed the importance of a good education. This has been a value Dr. Khamis has retained since his passing earlier in her life. She recalled seeing many pray at his funeral, which transitioned to an enhanced embracement of her Islamic faith. Her religion became a huge part of her life and was important during her college experience. She was in college during the 9/11 attacks. Following such a traumatic day in U.S. history, many had a certain prejudice towards Muslims and racism towards the religious group grew in prominence. Dr. Khamis was directly affected by this. One day, when driving home from work, a man followed her for miles and while she was stopped, he yelled a racial slur at her and spit on her. After this, she found herself questioning her faith and later made the decision to unveil. She spoke on how she uses these experiences to advocate for minorities. These experiences drive her work as a counselor and professor. Dr. Khamis’ story shows us how we can use the obstacles we face to do truly amazing work in the world and help others.

From Systemic Violence and Trauma to Justice and Hope 04/07:

During this enlightening conversation, Dr. Yi-Chun Tricia Lin had a conversation with Sanae Kawaguchi. Sanae was a child during World War II and was a victim of Executive Order 9066. Instead of going to one of the camps, her family evacuated and faced many struggles. They often had to live in horrible living conditions such as a chicken coop and were forced to work in undesirable conditions. She spoke of her struggles during the Second World War and also talked about how shocked and scared she was when the recent hate acts occurred against AAPI. She thought that the U.S. was past this and could not believe this was happening again. Sanae also talked about good memories she has had in life. After the order was lifted, she later moved to New York and became a dancer and performer. She has also illustrated for a book and written a few of her own books. There was a part of the event when attendees could ask questions. One thing Sanae said that stood out to me was when she talked about how allies can help. She spoke about how if you know someone who is affected by racism, you should ask them how you can help and show that you care. It was really powerful to hear Sanae Kawaguchi’s story. We can really learn from her story and make sure we share our stories and lift each other up.

More information on Sanae Kawaguchi can be found here.

St. Germain Lecture 04/08: This lecture is held annually by the Department of Political Science and Public Policy. A familiar face, Merrimack alumnus Meghan Grady ’06 returned to her stomping grounds to speak with students and faculty for this year’s lecture. Grady double majored in History and Political Science during her time at Merrimack and went on to pursue her Master’s degree of Public Administration at Roger Williams University. Now, she works as the Executive Director of Meals on Wheels of Rhode Island, which feeds many families in need across the Ocean State. Not only did Grady touch upon the impacts of COVID-19 on their service, but as she spoke to guests, stressed the importance of continuing to follow CDC protocols to contain the virus as much as possible, as well as the role attitude plays in the outcome. She included a quote from St. Augustine: “Bad times, hard times, this is what people keep saying; but let us live well, and times shall be good. We are the times: Such as we are, such are the times.” Her message, in simple terms, was to do your part to prevent the spread of COVID-19 as this will pass, and that our actions now dictate the future. The overarching impression that Meghan Grady left, at least for me, was this: we all have dreams, and as long as we work hard towards achieving them, they will be attainable. Maybe not today, but someday. Grady dreams of working in Washington D.C. someday while still retaining an immense passion for the work she does helping families in need with Meals on Wheels. It was hard to not leave feeling empowered.

Open Forum on Racial Justice and Systemic Challenges 4/22: Following the guilty verdict of the Derek Chauvin trial, Merrimack held both a virtual forum as well as an in-person vigil for students and faculty to gather in memory of those lost throughout the past year and reflect as “one.” During the forum, attendees were split into breakout rooms where reflections took place, and then were brought back to the main room if comfortable sharing. Even as a remote student, I felt connected to the others in my group as we each discussed our experiences with racism and discrimnation, even if not all have been personally affected by it. It was empowering to hear other people’s stories as well as share my open heart with other individuals and find strength in our differences together.

The appointment of Dr. Simona Sharoni as Special Assistant to the President for Diversity, Equity and Inclusion has grown awareness like we have never seen before. She brings to light, the important issues happening around the world as well as to members of the Merrimack community. I look forward to future Social Justice Months and continuing to attend Diversity, Equity and Inclusion Events.

Check out the rest of the events held for Social Justice Month here.