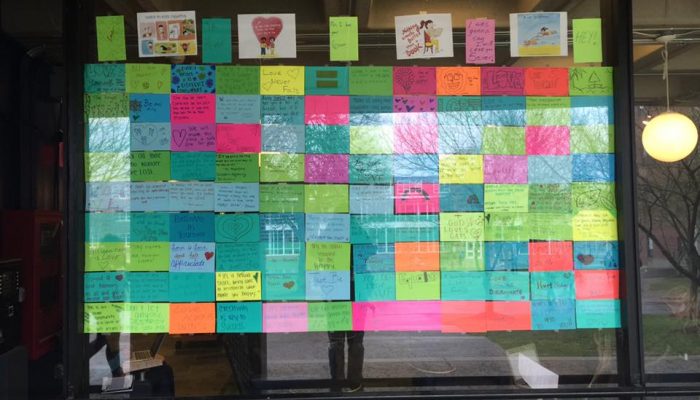 On April 3, Merrimack College’s Social Justice Month hosted Kaden Mohamed, a proactive memeber of the LGBTQ community and an Executive Assistant and Advocacy Associate for a national organization, Keshet, which works for LGBTQ equality and inclusion in Jewish life.

The event took place in the McQuade library conference room on the first floor where a small number of students and professors gathered to educate themselves and learn about Mohamed’s story about being transgender.

Originally from Queens, New York, Kaden described the diversity of his hometown as, “one of the few places that speaks the most languages, has the most ethnicities and races represented anywhere in the world.” However, even growing up in such a diverse place, Mohammed had no exposure to transgender issues or individuals. According to Mohammed, “Growing up, I always felt like there was something missing and was not clicking in my life.”

Mohammed moved to the Boston area in 2010 to attend Wellesley College. There he studied Women’s and Gender Studies and Education Studies before graduating top of the class. Now Mohamed works at a organization called Keshet, which serves the LGBTQ community in various ways.

“We are trying to make changes in the trans community and push the envelope so that more trans people can have a life like mine where they are experiencing mostly good things and not constantly having to face discrimination,” Mohammed said.

Mohammed also urges the Merrimack College community to “Become an Ally” to facilitate the embrace of the transgender community and join hands in order for the prejudice towards the trans community to be eradicated from the world.

Izzy McDonnell, a sophomore at Merrimack, also went to the “Life as a Transgender Person” event during the Social Justice Month. “Events like these are very essential in understanding the day to day life experiences that other people go through,” McDonnell said. “Kaden is a very strong and his life story is very powerful and we as humans should strive to be mindful other people’s feelings as well as be part of the movement to facilitate change and it should start here at Merrimack.”

According to Allman, “Trans community is the new kid on the block and 25 years ago it was only being gay or lesbian. We need as a community starting with here at merrimack to embrace it.”