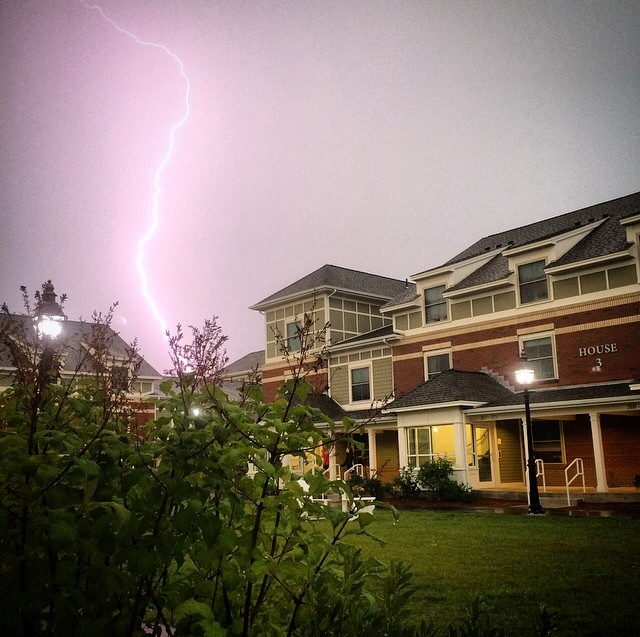 Severe thunderstorms rolled across campus on Saturday, September 6 around 5 PM. There were several reports of flooding and fallen trees around many parts of the Andover and North Andover areas according to local officials. High winds and heavy rain almost made it impossible for drivers on the road to see even ten feet ahead of them according to Senior Nikki Wanless who was frantically trying to return to campus after being caught in the storm. “My windshield wipers were on full speed and I was just driving based off of the faint break lights from the car ahead of me,” Wanless said.

There were also reports of brief power outages in several residence halls on campus. According to sophomore Joanna Haswell, the lights and TV in her Deegan West dorm room flickered multiple times during the storm before loosing power all together for a few brief moments. Senior Kelly Vaillancourt along with many other students residing at the on campus apartments reported loosing power for a short time more than once during the storm. The head of public relations here at Merrimack College, Jim Chiavelli, told The Boston Globe that “a Dunkin Donuts worker was struck by lightning during the storm around 5:20 PM” on Saturday evening. “The worker was moving trash behind the store when lightning struck him,” Chiavelli said. “The man was conscious and alert, and was taken to an area hospital where he was not admitted,” said Chiavelli.

Reports of damaging and even deadly lightning strikes were across the surrounding area. According to WCVB Channel 5 Boston, two women were struck by lightning while in the water at an Ipswich beach on Saturday evening during the storm. The women were unresponsive and rushed to Beverly Hospital where they were placed in critical condition before being transferred to Massachusetts General Hospital according to WCVB. Marguerite Tomany, 61 and Marianne Melnick, 69, later died due to their life-threatening injuries.