Series Review: “Higurashi: When They Cry” 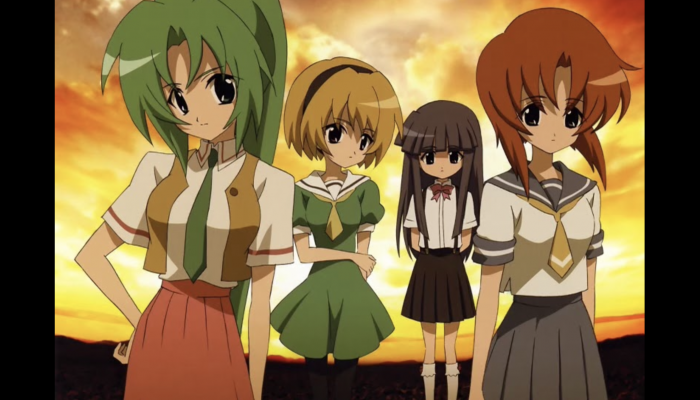 Higurashi: When They Cry, or simply, Higurashi, is a horror/mystery anime series that is spread across different iterations. Higurashi was originally a visual novel, a type of game that prioritizes story above all else. For this review in particular, I will be focusing on the television series adaptation, which consists of two seasons (Higurashi and Higurashi Kai) and a short epilogue (Higurashi Rei) produced by Studio Deen that first aired in 2006, along with a two season long sequel/side story (Higurashi Gou and Sotsu) produced by Studio Passione that first aired in 2020. The series is currently licensed for streaming in the U.S. by Sentai Filmworks and FUNimation. Sentai has the Studio Deen adaptation, and FUNimation has the Passione adaptation.

When it comes to story, it excels greatly. It is hands down the best mystery series that I have seen. It takes place in a small, rural town in Japan called Hinamizawa. Keiichi, a transfer student from the city, finds himself with new friends quickly in this rural town. However, he finds himself gaining less trust in them when he finds out about the dark secret behind the town and the government conspiracy that is about to unfold. In subsequent seasons, the story evolves into more of a supernatural thriller rather than a horror or mystery. The story’s structure, especially at first, can be disorienting. Instead of a more linear approach to unfolding the mystery, Higurashi likes to divide the story into 4-8 episode chapters that slowly feed you the mystery, and then, in later episodes, reveal the answers to the mysteries in similarly structured batches. Simply based on the story, it is an easy recommendation.

In terms of art and animation, Higurashi can be… pretty inconsistent. And that’s putting it lightly. The 2006 Deen adaptation can look good when it wants to, but it tends to have a lot of off model character designs and animation errors. Too often, it makes scenes that are supposed to be frightening into goofy and unintentionally hilarious moments. At the same time, the off-putting character designs can add to the horror and dread. The seasons done by Studio Passione have the opposite problems. It is far more consistent in terms of art and animation – and it looks beautiful. However, it takes away from the horror a little bit, opting for more of a cute aesthetic, which, admittedly, could make it all the more terrifying when stuff starts hitting the fan.

Sound and music is a staple of Higurashi. Higurashi, in Japanese, means ‘cicada’, so you can bet that there are a lot of cicada sound effects throughout the series, and always right before some horror stuff is going to happen. It is always bone-chilling to hear the low buzzing of the cicadas in the background. I cannot remember a bad opening theme from the anime. The soundtrack as a whole was really creepy and added a lot to the series.

If you are a fan of anime, or even just a fan of mystery/horror in general, this is a must watch: 8/10.