Home > News > Saving One Life at a Time From Mendel Pond

Saving One Life at a Time From Mendel Pond 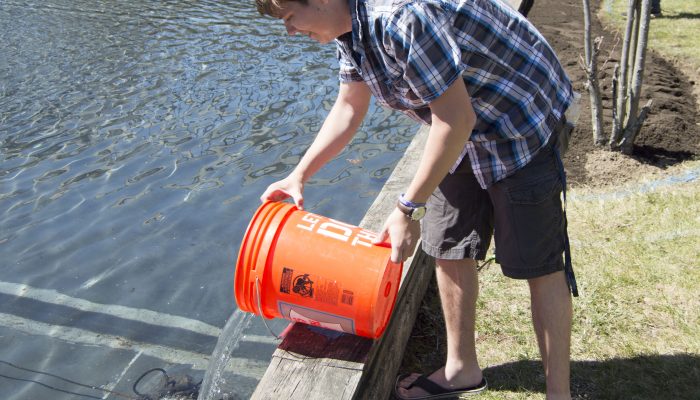 A couple of weeks ago, Sean Krause, a senior at Merrimack, was enjoying the scenery by Mendel Pond when he noticed something moving in the puddles that were left over. At the time, Mendel Pond was full of next to nothing, besides a few scattered puddles.

Krause discovered that there were fish still living in the puddles and decided to do something about it. He found Environmental Engineering Professor Cynthia Carlson, and they worked together for an hour and a half to save the fish using only a shovel, a broom, and some buckets.

“It was really upsetting to see them in the condition they were. Where the fountains are, there is about a three foot deep pool to allow water flow to the fountains. The entire three feet was filled with sludge which carp, catfish, and crawfish were stuck in. We saved the ones we could reach and see, but the others we had to leave behind, especially because we only had three 1-3 gallon tanks to store all the fish we had saved in,” said Krause.

Krause estimated that himself and Carlson saved approximately 20 carp, 75 catfish, and 25 to 30 crawfish. For about a week, the fish stayed in small tanks and buckets located in lab areas of Mendel.

Carlon’s parents donated a 55 gallon tank to help the cause and many of the fish have been doing well because of it. The engineering department also chipped in as well with items like food and filters for the fish.

“We do not mind caring for the fish but we cannot release them into the area because none of the fish are native to the region. So for now, we are taking care of them until we can find them a new home,” said Krause.

Krause and Carlson released 4 hardy fish into the pond as test fish to see if they were able to live in the water. Currently the fish are most likely hiding under the fountains, so it is difficult to see how they are doing.

In the meantime, many other creatures have been finding their way back home into the pond. In the past few weeks, the pond has been refilled and has undergone renovations.

“Water beetles were back less than 12 hours after the pond was refilled. Dragon fly nymphs and water stick bugs seem to also really be enjoying the pond. It is an amazing living classroom, and I see something new every time I spend time there.  We are so lucky to have Mendel Pond in our midst!” said Carlson.