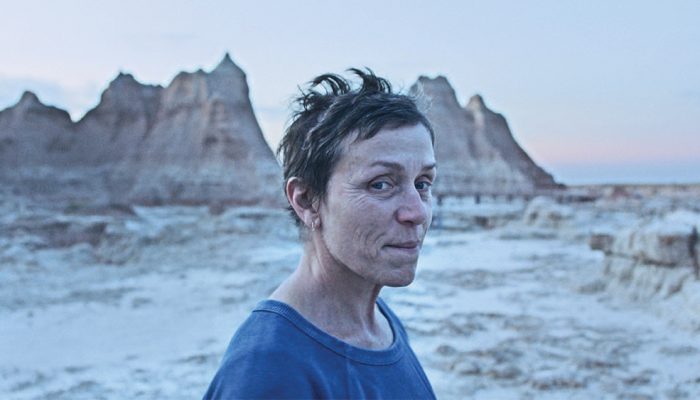 Hollywood is well into its awards season, which eventually culminates in the Academy Awards. The nominations list was recently released and  while there are some films not included that I would have liked to see, as is always the case, there aren’t any major surprises in the nominations. One of those nominations and the main movie dominating the other awards is Nomadland, which has emerged as the main frontrunner for Best Picture. I am going to split this review into two segments, the first being my review, and the second being a sort of rant about one of the key issues in film criticism and the academy that I think this movie presents.

Nomadland is directed by Chlo Zhao and stars Francis McDormand in the story of an elderly woman who, after the death of her husband and the loss of most of her assets in the great recession, lives in a van travelling around the midwest from job to job as a modern day nomad. The best part of this movie is the cinematography and the direction of Chloe Zhao. Later on when I critique this movie, I want it to be clear that it is not because of her. Additionally, Francis McDormand is, as usual, very good. However, it was nothing awe inspiring, but definitely solid.

Unfortunately, that’s all that I liked about Nomadland. The main flaw being that it felt to me like nothing happened. For a movie with only a one and a half hour runtime, it sure felt like an eternity to watch. The story just sort of follows the main character, Fern, in her life as a nomad. She lives in the van and spends most of her time either working at a revolving door of jobs or trying to make the van more liveable. At a few points in the story she visits some other nomads at a yearly gathering and converses with them. The movie didn’t really have events in it. There were no moments of initiation in the story where I felt like something would start to happen and there were no moments where I felt like there was tension or drama.

The story revolves around Fern and her grief after losing her husband so I understand what is happening is internal. Even still, I found myself constantly bored and just kind of sitting through it. Additionally, the film misses the mark on a number of things for me. Mainly, the film seems to be making some sort of statement about large corporations and the effects of the great recession. But by the end the focus of the story is on Fern’s internal development so that stone seems to be left unturned. Additionally, I don’t understand Fern at all. It is clear that she doesn’t like living in the van, however when she is given the opportunity to live somewhere that isn’t a van, on multiple occasions she refuses. I understand personal development and overcoming grief, but you’re living in a van!

Nomadland is a very well shot, well directed, and well acted. At the same time, however, it was a nightmare that felt like a burden to watch. A story that lagged and lacked interesting elements with sparse dialogue that even when present did nothing to satiate my need for something clever or interesting to happen. This is a movie that’s whole problem starts and ends with its script. It’s story makes it all the more frustrating that it is probably going to win Best Picture.

Now your first reaction to hearing this might be to think: “well, they are the academy, Joe is just a college student, he’s probably wrong.” While that is a perfectly reasonable thing to say, I ask you to consider that I am a decently smart college student, particularly in this topic. I am a relatively normal person who watches movies through the same eyes as most viewers, so hear me when I say that the most elite level of filmmakers that see movies as the most premiere form of art and the same that belittle Marvel films for their dissolute crimes of making money, have hailed this movie as a masterpiece, because their elitism is killing them, and in turn, their industry.

The words that you will read a thousand times in reviews for this movie, and the words that you will hear a thousand times at the Oscars when they talk about this movie, are that this movie is “such a beautiful film.” The diction of this statement is technically true, however, I am concerned with why they are calling it “such a beautiful film.” The reason is this: elite filmmakers think of themselves as artists and art is beautiful. That’s it. And I have no problem with that. Films can be beautiful, but just because they are doesn’t mean that they are masterpieces, and it shouldn’t mean that they will win Best Picture. Do you remember the last movie that film elites liked to call “such a beautiful film”? I’m thinking of the 2017 Best Picture winner The Shape of Water, which you might remember as “the weird Guillermo Del Toro movie that you saw a trailer for once while you were in the theater waiting to see Spiderman: Homecoming,” and I am cursed to remember as “the fish sex movie.” That isn’t a joke, that is my memory of a movie where a woman has a sexual relationship with a fish. I will also remember it as the movie that won best picture over Three Billboards Outside Ebbing, Missouri, which is one of my favorite films ever and it is something that I will never not be upset about.

My point is this: elitism is a problem, probably everywhere, but certainly in the film industry. The Academy Awards are the most coveted of film awards and Best Picture is the grandest of all awards. It graces headlines and sparks conversation and it immediately elevates the film that wins it into Hollywood immortality, but it is selected by a group of predominantly elitist people. They pick movies that they think are the most beautiful or the best because they are artists and they want to honor other artists and continue to embolden film as an artform and that is good and dandy. But how many of you actually saw The Shape of Water? How many of you actually saw Parasite? At the time of the posting of this article both of those movies can be streamed on Hulu and I don’t think anyone watches them.

The Academy Award for Best Picture should go to the movie that tells the best story in the best way. That will be the movie that people will like and remember and talk about. The year was 1994 and Forrest Gump won best picture. Now Forrest Gump is a tremendous movie and I don’t want to take anything away from it, but in 1994 it beat Pulp Fiction and The Shawshank Redemption, two of IMDB’s top 10 films of all time. How about 1998 when one of the movies up for Best Picture was Saving Private Ryan, a film that is widely considered to be one of the greatest war films of all time, and it lost to Shakespeare in Love. Simply put, elitism in the film industry and in the academy leads to them picking the wrong movies to represent their industry, and for the betterment of film they should reevaluate how they select winners.

This year it looks like a sure thing that Nomadland will win Best Picture. Consider the other nominees, Judas and the Black Messiah, a film about racism and police brutality, or Promising Young Woman, which puts a twisted spin on a story about sexual assault and sexism, or Trial of the Chicago 7, a film about politicaly motivated actions, cultural revolution, and protests that has come out in a time of protest and cultural and social instability. Despite the fact that we will probably always look back on 2020 as a bad year for movies, because we couldn’t get popcorn and sit in the theater, there are plenty of good options for Best Picture this year, and I have a feeling the Academy won’t pick any of them.