Reusable Cups in the Den 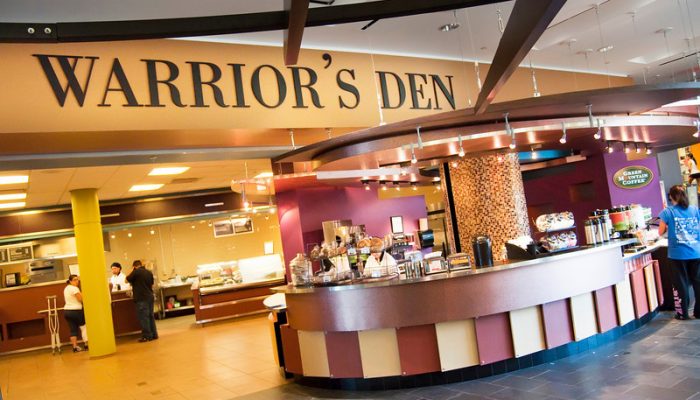 Merrimack College’s SGA Dining Committee put forth a reusable cup initiative on Oct. 2. The high volume of beverage purchases in the Warriors Den led to some recycling issues, given that straws are not recyclable material. The use of reusable cups will help simplify recycling efforts on campus and increase Merrimack’s effort to go green..

Geena Levine, a member of the Dining Committee, explained during the SGA meeting that students would either purchase the cups or they would be given out, but this is yet to be determined. Generating excitement around going green is crucial to the success of recycling. Student participation is what drives the recycling efforts on campus.

“Both this initiative as well as the recycling one will hopefully show students that Merrimack is always looking to help the environment and do things to make the world a better place,” added Mary Levine, another member of the SGA Dining Committee.

“Essentially, students would buy a reusable cup from the den, maybe somewhere around $3, and then every time they bring their reusable cup to the den for coffee, they will get coffee at a reduced price,” Mary Levine explained.

As a student led initiative, the idea is to aid the urgent need to further recycling efforts on campus.

“The biggest impact this will have are the environmental ones. By Merrimack choosing to go green and get rid of plastic on the campus, we have chosen to make the world a bit better,” Mary Levine said.

Colleen Mearon, a sophomore at Merrimack, says she often purchases coffee at least two to three times a week on campus from both the Warriors Den and McQuade Library.

“I think a good way to approach this idea would be to either have students buy a cup at the beginning of the year and charge less for those using this reusable cup, or to just have students purchase one beverage and if they request a refill it could be cheaper,” Mearon added.

“This idea is supported by Sodexo, however, and we can hopefully see this within the next month or so,” said Mary Levine. Implementing the reusable cups as soon as possible will allow students to get a feel for the process and create a better understanding for what it means to go green.

Mary Levine also added, “Making this a Merrimack initiative not only helps students to make this a part of their daily lives, but it will also project a better image of Merrimack as a whole. An image that supports the reduction of plastic waste in our environment.”

By offering yet another starting point, this initiative ties into the larger environmental projects on Merrimack’s campus. Incentives to have single-stream recycling containers in academic and housing buildings are currently in place. The reusable cup strategy is the start of expanding efforts, and Mary Levine also included that placement outside of the Warriors Den is up for discussion.