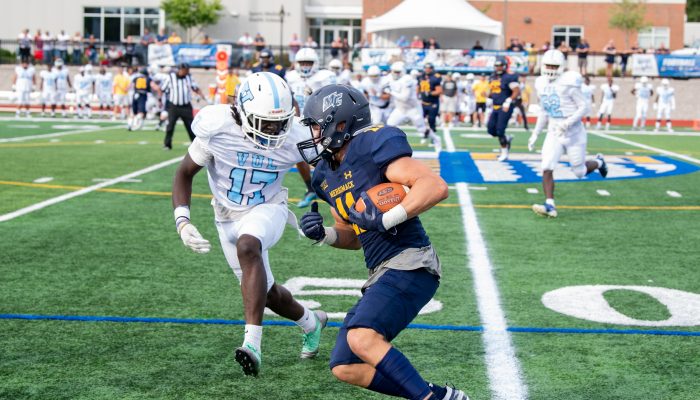 The Merrimack Warriors opened up their 2019-2020 season at home against their first ever Division 1 opponent, The University of Virginia Lynchburg Dragons. On August 31, over 4,000 people crowded into Duane Stadium to show support for the first ever Merrimack D1 game. Stunningly, the Warriors jumped out to a 31-7 lead at halftime behind touchdowns from Matt Brehon, sophomores Johnny Rozario and Malachi McFadden, as well as a 36 yard field goal by grad student Corey Resendes. After halftime, the Warriors kept up the pressure and added two more scores, a 2 yd run by Jamari Venter and a 42yd run from Matt Brehon. This propelled the Warriors to a 45-14 win over their inaugural Division 1 opponent, Virginia Lynchburg.

On September 21, the Warriors played host to the Comets of Mayville State. The Comets travelled from North Dakota for their out of conference matchup with the newly D1 Warriors. From the opening kickoff, it was clear that Merrimack was the superior team, and the Warriors held a 46-7 lead going into halftime. Even after being in complete control of the game at the half, the Warriors didn’t let up and went on to win 76-7. Merrimack starting sophomore QB Christian Carter led the way with 206 passing yards, 4 touchdowns, and 1 interception. Running back Matt Brehon added 175 yards and 3 touchdowns. For the receiving core, senior Johnny Rosario led the way with 93 yards and 2 touchdowns. The Warriors have three big matchups in October, playing Bryant on October 5 during homecoming weekend, followed by Presbyterian, and then away at Delaware State.