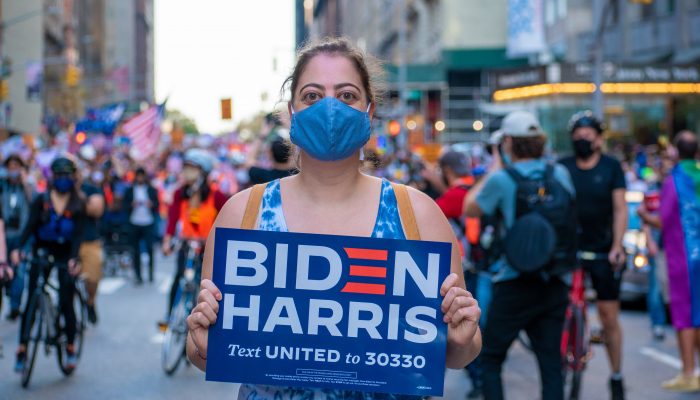 This past weekend, Joe Biden was announced as the 46th President of the United States, along with his running mate, Kamala Harris, who will serve as the first woman Vice President in U.S. history.

Not only is Harris a woman, she is of African-American as well as Asian-American descent. She is a woman of color holding the second highest office in the United States. While I do not understand the struggles associated with being a woman of color, I do understand the power dynamic that women face when studying politics. It was always seen as a “man’s job” to serve as President or Vice President, but  this election created a landmark in women’s history.

When Harris began to speak  about being the Vice President of the United States during her victory speech ,I suddenly burst into tears. These were not tears of pain, but tears of hope and joy.

As tears fell down my face, my mother looked at me and said, “That is going to be you someday, Liv.” I responded with “I doubt it.” My ever so faithful mother then said, “Neither did Kamala, but look at her now sweetie.”

With a woman standing on that stage, I immediately felt empowered to accomplish anything. This victory gratifies all of the hard work Justice Ginsburg put in throughout her lifetime towards advocacy for women’s rights.

While I do not condemn those who voted against Biden and Harris, all women should be able to recognize how revolutionary this is for us. Biden delivered both in his victory speech as well via social media platforms such as Twitter and Instagram, “The work ahead of us will be hard, but I promise you this: I will be a President for all Americans— whether you voted for me or not.”

With America divided, these words created a sense of hope and unity. Harris also delivered remarks in the same fashion, “While I may be the first woman in this office, I will not be the last— because every little girl watching tonight sees that this is a country of possibilities.”

While Harris was not a first choice among many women during the primary election, she has since created a wave of inspiration across the nation. “What a testament to Joe’s character that he had the audacity to break one of the most substantial barriers that exists in our country and select a woman as his Vice President,” Harris said.

This victory is not only a demonstration of character and humility, but proof to all women that the sky’s the limit. It was about time a woman served in the White House, not as First Lady or Second Lady as society expects, but in one of the highest ranking offices in the United States. And that is exactly what Kamala Harris will do.