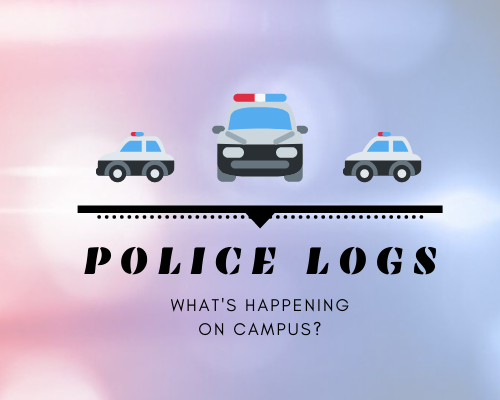 10/4/2019: Caller reports of an odor of marijuana. Officer was advised and sent to assist with the AC. Officer is cleared, he has confiscated 2 grinders, one bong, and a glass container with a leafy substance.

10/4/2019: Multiple units dispatched for a fight in progress outside of the SAK. All students that are involved are being taken to the station.

10/10/2019: Resident student came in to report someone stole his playstation out of his common room.

10/12/2019: Steam from a shower was the cause for a fire alarm in South Residence Village

10/14/2019: Off campus resident called MCPD reporting that the apartment above her is moving furniture. Officers spoke to students who stated that they weren’t moving furniture and were all going to bed.

10/14/2019: AFD called MCPD reporting a fire alarm going off on campus. AFD has reset the fire panel. Cause was a hair straightener.

10/19/2019: Officer addressed male student who was seen removing cones and bringing them to his dorm room

10/19/2019: Officer addressed male resident for jumping on ropes behind the apartments

10/19/2019: Caller advises someone has sprayed the fire extinguisher in the hallway of a residential building

10/20/2019: NAPD called for assistance with a loud party at Royal Crest. MCPD responded. NAPD addressed that the party was not a college related apartment.

10/25/2019: Officers called to report an employee found a baggie of marijuana in the lobby of Ash. Officer was advised and responded.

10/25/2019: Officers responded to check on the well being of a student that may be intoxicated. Spoke with male resident student who was alert and conscious. He advised he was fooling around with friends.