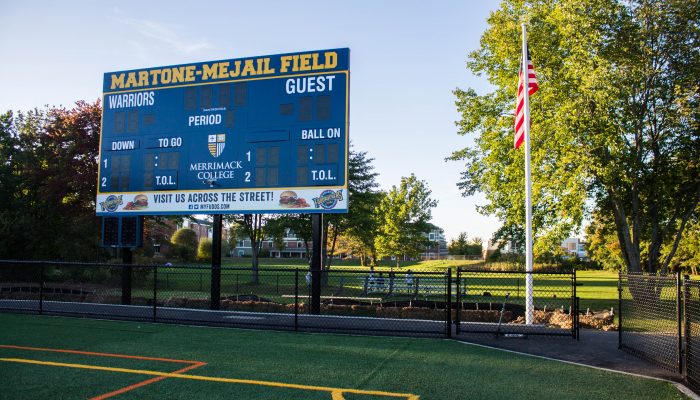 Every fall, millions of Americans turn on their TVs on Sundays to watch NFL football. But now many are turning in for another reason — to see which players take a knee while the national anthem is played as a form of protest against discrimination in this country.

A protest that began with then-San Francisco 49er Colin Kapernick exploded into a national battle between those who support the protest and those that say it’s an offense to those who have died fighting for our country.

The firestorm lit by a tweet by President Donald Trump last month has spread to other sports like professional basketball.

So how does the Merrimack community feel about the issue?

“Personally, I understand 100 percent where (the NFL players) are coming from and why they’re kneeling,” said sophomore Connor Boyle. “However, I also understand that hundreds of thousands of people have fought and died for the U.S flag and I believe kneeling during the anthem is disrespectful to those fighting for our country.”

Jorge Elias is a junior who plays on the football team. He said no Merrimack player has taken a knee, but the team isn’t on the field for the national anthem during home games. He hasn’t seen any opponents take a knee. He does think students should be allowed to, if they want to.

“I think a lot of kids have thought about it but haven’t done it,” Elias said.

Kapernick was let go by the 49ers after last season and has yet to land another NFL job. Last season, a few players followed his lead by refusing to stand for the anthem.

But this season, Trump inspired dozens of other players and coaches to join when he said “NFL team owners need to fire players” who take a knee while speaking at a rally in Alabama. He followed with this tweet: “If a player wants the privilege of making millions of dollars in the NFL, or other leagues, he or she should not be allowed to disrespect our Great American Flag (or Country) and should stand for the National Anthem. If not, YOU’RE FIRED. Find something else to do!”

The tweet was met the following Sunday with dozens of players following Kapernick’s protest in what’s been called the #takeaknee movement. The outrage on both sides prompted some NFL teams like the Dallas Cowboys to come up with compromise protests like the teams standing arm-in-arm in unity. The following week, networks did not broadcast the anthem while it was being played.

NFL Commissioner Roger Goodell did not punish anyone involved in the protest but took his own swipe at Trump.

“Divisive comments like these demonstrate an unfortunate lack of respect for the NFL, our great game and all of our players, and a failure to understand the overwhelming force for good our clubs and players represent in our communities,” Goodell said in a statement.