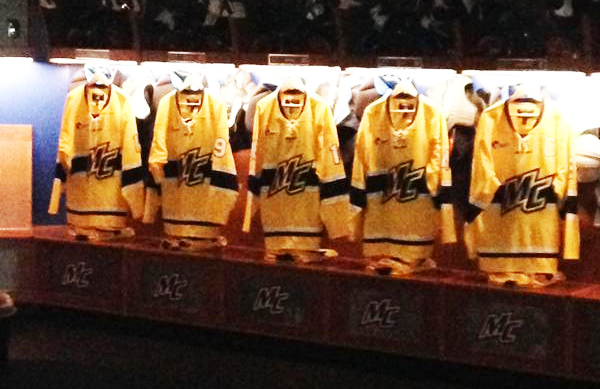 Both the men and women’s ice hockey teams finally opened the doors to their newly-renovated team locker rooms just in time for the season to kick off. The first ever women’s team received a brand new locker room while the men’s locker room received major improvements. The new locker rooms give players a spacious environment to prep for practices and games as well as relax and bond with their teammates.

Senior forward Justin Hussar said, “It’s nice for all of us to have a place to hangout and prep for games. We were all really excited when we first got to see it”.

The new locker rooms feature a state-of-the-art team lounge, dining area, bathrooms, video review area, as well as other amenities. The lounge area is one of the more favorable rooms among the players. This room allows for the players to relax and hangout before or after they hit the ice. It features a kitchen and dining area, tables, chairs, couches, as well as an entertainment area.

Senior John Gustafsson stated, “The new facilities are another step in the right direction for our program. The locker room and lounge are more than we could have asked for. Its great for the team to have a fun and comfortable place to hangout in our downtime as well as a nice kitchen area where we are able to have a pre-practice snack”

Another addition to the hockey team’s locker rooms is a new hallway which was constructed to connect both the men and women’s locker rooms as well as a pathway that connects Lawler Arena to Gallant Arena, allowing players to walk to and from either rink.

Women’s head coach Erin Hamlen stated,  “Walking into Lawler Rink every day is a privilege, and the addition of a brand-new locker room facility to go along with our brand-new program is like a dream.”