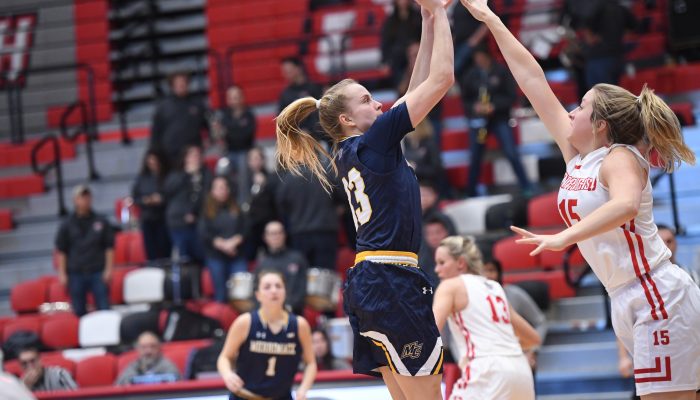 The Merrimack College Men and Women’s Basketball teams have shown that they belong at the Division I level competing in their new conference. Neither team was looked at as much of a threat to any of the schools in the NEC, but they weren’t expecting the “underdogs” to have such great success. Both teams combined are the winningest school in the state of Massachusetts.

Senior Denia Davis-Stewart, commonly known as Stixx and from Dorchester Massachusetts, has had a very successful career during her collegiate play at Merrimack College. Originally, she signed to Merrimack to play Division II basketball and now is leaving the Division I level making history for herself.

“I was excited, I always like being the underdog and seeing a new level of competition. I have always said that you have to prove to me why you’re better than me,” stated Stixx as she shared what emotions went through her head after hearing her last year was going to be different, although it wasn’t much of a difference for her. Leaving the NE10 conference, Stixx led the conference with 107 blocks and was nationally ranked fifth in both total blocks and blocks per game. Making a name for herself in the NEC conference, Stixx has earned several NEC Player of the Week awards, while setting several career highs including 1,000 career points and 1,000 career rebounds.

Head coach Monique LeBlanc brought in a total of six new players with four being freshmen, one transfer and one graduate student, who have all been key players in this season’s success. The first-year point guard, Jayme DeCesare from Johnston, RI, seems to be a top candidate for the Rookie of the Year award for the 2019-2020 season. The transition from Division II to Division I was exciting for the school as a whole, although everyone knew that the recruiting process was going to be tough because of it.

DeCesare shared how she decided on committing to a school that was entering a brand new era and stated, “As a freshman, I knew I wanted to go somewhere where I would feel comfortable playing at, be able to make an impact right away and be able to help my team build-up to be successful.” DeCesare has successfully done so with a 2.2 ratio on the season and ranking fourth in assists, and fifth in three-point percentage.

Coach LeBlanc has set an all-time wins record after their victory over Fairleigh Dickinson University late in their season. Coach LeBlanc more than anybody knows her team well and how they work. And of course, how they don’t.

“Making sure that we are really outworking our opponents and working to improve, and making our strengths even stronger to close the gaps in our weaknesses,” LeBlanc said.

The Warriors have brought a new intimidation factor moving forward in the NEC after accomplishing a five game winning streak, making them 17-8 overall in their first season at the Division I level.

Opening their season, Men’s Basketball traveled to Bangor, Maine, to face the University of Maine, losing 84-64. While a tough loss could have derailed them from the start, the Warriors showed that they are incredibly capable of their new conference when they defeated Northwestern on the road, 71-61. The team is led by three seniors, Juvaris Hayes from Paterson, NJ, Jaleel Lord from Jersey City, NJ, and Idris Joyner from Plainfield, NJ. The New Jersey trio is officially holding the most wins in school history.

Senior Jaleel Lord became the 46th player in program history to reach 1,000 career points this past season. Alongside him is senior Juvaris Hayes, who is now the NCAA’s all-time steals leader. Hayes broke the 448 NCAA steals record that has been held for the past 17 years by Tennyson Whitted of Ramapo College.

The Merrimack Men’s Basketball team did so well that it earned the NEC championship. Hayes was also named NEC defensive player of the year. Coach Joe Gallo, who is in his fourth year as head coach, was named NEC “Coach of the Year.”

“Our overall goal was to win the regular season championship, and from that day on we don’t ever talk about it again,” said Gallo, which clearly worked for them.

Both Men and Women’s Merrimack College basketball teams entered the new conference by breaking records and making history, and there are likely bigger and better things to come for them.