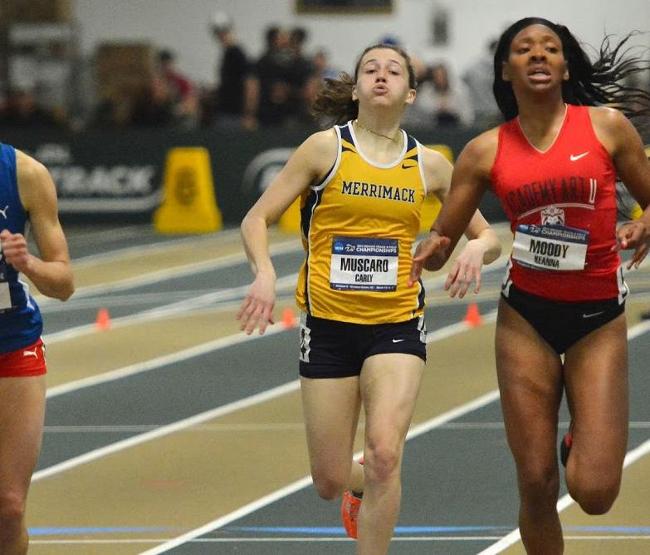 Freshman Carly Muscaro ran away with Northeast-10 Rookie of the Year honors for Women’s Indoor Track, and broke her share of records in a remarkable first season as a Warrior.

It’d be reasonable to rename the Merrimack 400 meter record the “Carly Muscaro,” as she broke the school record for the 400m dash by three seconds… and then proceeded to break it five more times throughout the course of the season. Muscaro said that breaking this record was the most special of all that she’s broken, because “It is my main event and I train so hard for it. It is a tough race both physically and mentally.”

The 400m is longer than a traditional sprint like the 100m dash, but too short to be considered a distance race, so it requires a strong degree of mental toughness.

Muscaro ran the event with such speed that she qualified for Division II Nationals in Winston-Salem, North Carolina. She ran the 400m in 56.87 seconds, which was good for a 10th place finish, and missed becoming an All-American by less than half a second. While she’s proud of her finish, the Ashland, MA native looks at the trip as a learning experience moving forward.

“Going as a freshman exposes you to the atmosphere that you want to experience again someday. This pushes you to train harder and stay determined,” Muscaro said. “Nationals are forever embedded in the back of my mind. I got a sense of what it means to be a real college athlete. I can’t wait to go again. Now I have the knowledge of what it is like to be there so next time will be a bit easier.”

Track may appear as an individual sport in many of the events, but Muscaro is quick to credit her teammates for her personal achievements, as she points out, “Without them I wouldn’t be as successful as I’ve been.” Muscaro explains, “Coming in as a freshman, I didn’t really have a lot of technique. The upperclassmen helped guide me with my form and block work.” 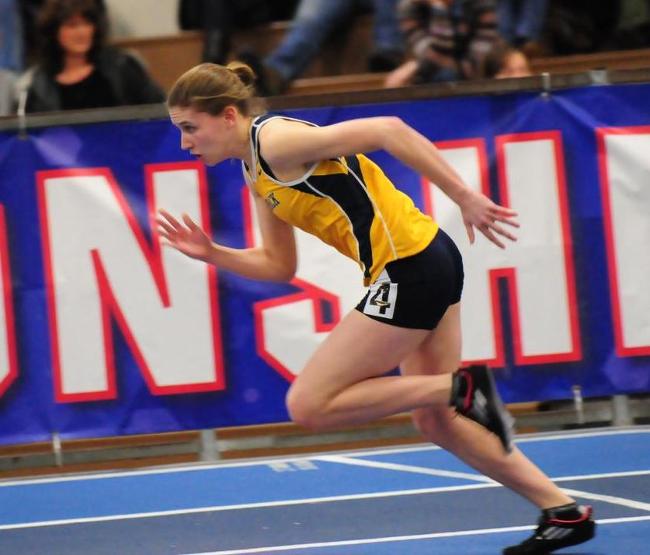 Muscaro impressed in February’s Northeast-10 Championships at the Reggie Lewis Center finishing 3rd in her 400m with a time of 56.21 seconds. A week later she was even more remarkable in the NEICAAA Championships. The NEICAAA meet consists of all of the schools in New England, in all divisions. Muscaro finished 3rd again, against greater competition, posting her personal best (and new Merrimack record) of 55.03 seconds.

The three-time Northeast-10 Rookie of the Week has shown no signs of slowing down with the Outdoor Track season beginning. Muscaro won the 100m race against 71 other competitors at last weekend’s Tufts Snowflake Classic. She was also on the relay team that placed third in the 4×100 meter event, and the points she accrued helped Merrimack to a 4th place finish out of 24 schools in the Classic.

This won’t be enough for Muscaro though, as she’s an athlete that has no time for complacency.
“I have many goals for my track career here at Merrimack. I hope to return to nationals as an individual qualifier as many times as possible, to go to nationals with the 4×400 relay team, to break 55 seconds in the 400m, to be the NE-10 400 champion, to be the NEICAAA 400 champion, to and be captain of the team.”

But at the end of the day one objective stands out above the rest, as she summarizes, “My main goal is the become an All-American.”

Given the way she’s performed in her freshman year at Merrimack, I’d bet on Muscaro to achieve them all. 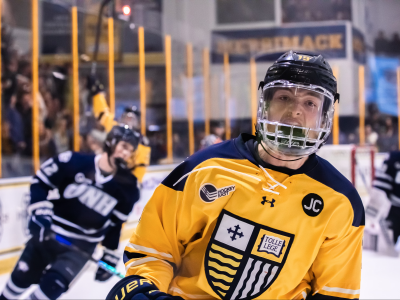