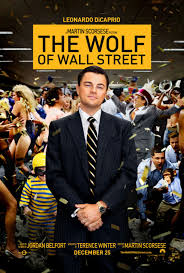 The movie The Wolf of Wall Street is one of the best movies I have watched recently. This movie was rewritten from the autobiography of a famous stockbroker on Wall Street, a man named Jordan Belfort. The Wolf of Wall Street is not like the traditional crime movies that give you the traditional moral endings; there are no moral standards in this movie. It focuses on the details of the crimes and the extravagant lifestyle that Jordan Belfort and his stockbrokers had. It is a fest of money propagate from the beginning of Belfort’s plan, but if you think about how the characters’ destiny changed overtime, he wasn’t criticized but sarcastic throughout the entire movie.

Jordan Belfort is portrayed by Leonardo Decarprio, and starts his career out as a stockbroker from Wall Street. Simply put, Belford is a wolf who is hungry for money, and ready to make it as a big stockbroker on Wall Street. Belfort is addicted to having money and getting call girls that it consumes his entire life. In the beginning of the movie, he talks to the audience directly to the camera very confidently states what he’s doing with his life, as he casually uses a hundred dollar bill to roll some cocaine. This symbol of Belfort taking part in doing cocaine is very obvious. On Wall Street, money is like drug and it will get you addicted. When the camera shoots to an FBI agent whom refused to take any bribes from Belfort, he happens to be reading a newspaper that said Jordan Belfort was in prison. People in the movie have no reaction to Belfort being in jail and the next scenes seem to tell us that no one really cares about Belfort and meanwhile he was in a prison uniform playing tennis. Although Belfort’s time on Wall Street working as a stockbroker was shortlived, he still managed to rake in a ton of money on his own and created his own company. Even after prison, Belfort began teaching people how to be rich, wrote books and gave speeches all over the world. It doesn’t seem that bad to get addicted to money.

People remember most of the movie contains many sex and drug scenes. Most of the sex and drug scenes were created in slow motion, and most of the time doesn’t include Belfort himself. It is more like a visual carnival. The question is, are all of those scenes really necessary? The sex scenes with full disclosure, the extravagant lifestyle and the humiliation to people are massive in the movie. People are willing and anxious to know about his way of success he can use the exact same skills selling his way of success just as he sells the stocks. Belfort was notorious for playing mind games with other people, mostly his clients. People believed that he wasn’t a fraud because of the success that he’s had with his own company he created called StrattonOakmont. We have heard so many “as long as ….. and we can…” and as soon as we sees an successful example, we will jump right into it.

The director of the movie Martin Scorsese was well known for his gang movies and his meaningful sarcastic style. The new style gang in the movie is The Wolf of Wall Street. This whole jungle style money world is what the director really wanted to emphasize. Jordan Belfort is hateful but he is never in a real gang, he is just a smart guy in the game. As long as we are in the times of money representing a man’s successes, Belfort’s style of success will hold and more and more Jordan Belfort will continually have their markets. This is a world that people believe in money, the culprit of the financial crisis: those CEOs who created those poison assets. Don’t they seem alike to Jordan Belfort? I am very certain that this movie is another classic work from Martin Scorsese that deeply reflects the dark side of our era.