The film charts the story of a déclassé socialite, Jasmine, played by Blanchett. Her cheating husband Hal (Alec Baldwin) has recently run afoul of the law through engaging in business pursuits that are dubious at best. Fraudulence leads to a prison sentence, followed swiftly by suicide. 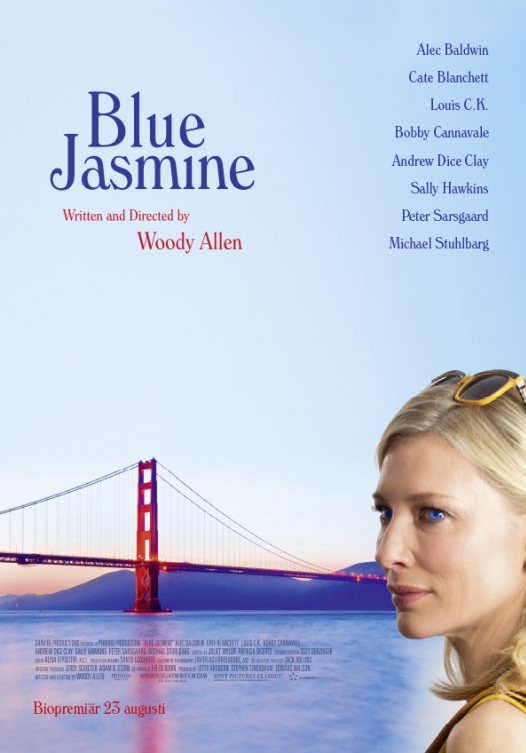 Jasmine has lost the wealth and cachet her husband provided, including manors and elegant fashion. Moving in with her working-class sister Ginger, played by the comely Sally Hawkins, places Jasmine in a more plebeian world. Nothing provoking more resentment than a bourgeoisie fall from grace, Jasmine attempts no adulteration of the contempt in which she holds her sister, her life, and her choice of partners. Jasmine’s character and values come out with clarity when her sister asks Jasmine how she can be broke, since she has come packing Louis Vuitton luggage and a Chanel suit. Jasmine can only respond with perplexity to the question; indeed, with horror, as these brands constitute the core of her existence. Like Mrs. Bucket (bouquet) on Masterpiece Theater’s “Keeping Up with Appearances,” Jasmine’s real name is Jennet.
Allen’s skills come to life in his witty contrast of upper- and lower-class life. Rather than adopt the orthodox liberal view of a virtuous — both spiritually and materially — underclass, Allen pitilessly evokes a world of cheap pleasures and violent, albeit passionate and devoted, men. Ginger, though young, is divorced, and has taken up with a new suitor only nominally different from her former husband.

The film relates Jasmine’s previous life with her husband Hal through a series of flashbacks, indicating that, though inordinately prosperous, malaise and discord also abounded in the couple’s life, nay, were a very part of their prosperity. Ginger’s later generosity in taking Jasmine in is effectively contrasted with the disdain in which Jasmine holds her sister and then- brother-in-law, Augie, when they had come to visit. Loathing her time with Ginger, flashback-Jasmine confides to Hal that she looks forward to the exit of her unfashionable sister. Bereft of any devotion to family — but, not, of course, when she is in dire need — Jasmine’s days consist of shopping and lunches with affluent friends, followed by soirees at the couple’s palatial manor.

Predictably, Jasmine’s interior life is impoverished, with no real culture or solidarity to sustain a flourishing existence. Her existence with Hal depicts the superficial values of the family. Engaging in what Heidegger called “idle talk,” Jasmine is also easily placated by baubles and jewels from Hal, reflecting the profound depths of chauvinism and patriarchalism that masochistically enliven her. Allen raises a pointed question: Is wealth a true arbiter of class and moral values? The answer is clearly no — at least wealth unaccompanied by a broader set of commitments, both ethically and culturally.

Thus, the superficial differences between Ginger and Jasmine are soon exploded by the arc of the film. Jasmine gives thought to going back to school, which she says she had dropped out to marry Hal, but her rhetoric arouses a correct posture of skepticism. Unable to find the vigor to accomplish the task of completing her degree, Jasmine goes to work as a secretary in a doctor’s office, to diminishing returns. She is incompetent and when her boss makes overtures in the office, the results are disastrous, leading Jasmine to leave the job.

In a flashback, Hal’s many brazen infidelities are revealed, with Ginger witnessing Hal taking a woman out to lunch in Manhattan. She debates with her husband whether she should tell Jasmine — a dialogue loaded with ambiguity, recognizing the perils of the situation. Jasmine eventually learns of Hal philandering from another friend, and is predictably shocked. Rather than depict Jasmine as a cuckolded lover, without a clue, Allen instead portrays Jasmine’s boundless skills of self-deception.

While Allen directs barbs at typical targets — wealth, bourgeois values, materialism — the clichéd liberal/progressive solutions he offers in so many of his films are nowhere to be found in “Blue Jasmine.” The principal antagonists in the pantheon of Allen’s films, from “Annie Hall” to “Midnight in Paris,” have typically been of a conservative ethos. Whether the purported anti-Semitism Allen finds in Diane Keaton’s hick family in “Annie Hall,” to the right-wingers of “Midnight in Paris,” foiling and heaping ordure on protagonist Owen Wilson’s dreams to be a writer in Paris, Allen’s cultural criticisms have mainly emanated from the left. How pleasing than, to see him dig a bit deeper in “Blue Jasmine,” reflecting profound questions about culture, morals and values that cannot be legislated away. While a move to the right would be the most unexpected of Allen’s many career metamorphoses, the implications of “Blue Jasmine” demonstrate that it is never too late to transition to the dark side of the political spectrum.