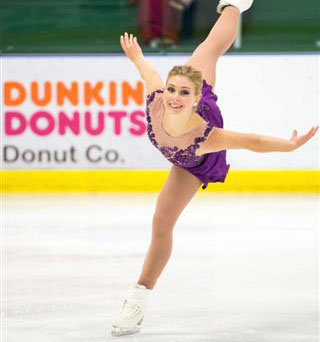 Headlining the North Atlantic Figure Skating Club’s athletes is Morgan Sewall from Scarborough, Maine. Morgan recently started her Freshman year at Merrimack College and is studying Creative Marketing and Communications. She has joined the Skating Club at Merrimack and is grateful for the opportunity to skate on campus. Some of her many on-ice accomplishments include earning the two highest tests in US Figure Skating: her Gold Medals for her Senior Moves in the Field and Senior Freeskate tests.  In 2012, she won the New England Novice Ladies title.  Placing fourth at Eastern Sectionals, she claimed a spot at the 2012 U.S. National Figure Skating Championships in San Jose, California, the first Maine lady in more than two decades to accomplish this feat.  Morgan followed that up in 2013 by winning the New England Junior Ladies title which again earned her a spot at Eastern Sectionals where she finishing sixth. Last season, Morgan placed first at Cranberry Open, Champlain Valley Open, North Shore Open, Colonial Open and placed 2nd overall at the New England Championships. This qualified her to compete again at Eastern Sectionals but was forced to withdraw after her Short Program due to a lower leg injury. This year Morgan has been progressively recovering from leg surgery but is gaining strength and plans to compete again at New England Regionals on October 19th and 20th.  Off ice Morgan enjoys photography, art and fashion. She currently is active photographing events on campus for the College Newspaper and enjoying time with the Art Club.  Coached by Matthew Lind and Jann Hull, Morgan will be skating her Short Program to Finding Neverland by Jan A.P. Kaczmarek and her Long Program to Scheherazade by Rimsky Korsakov.