Merrimack’s Own Crossed The Finish Line 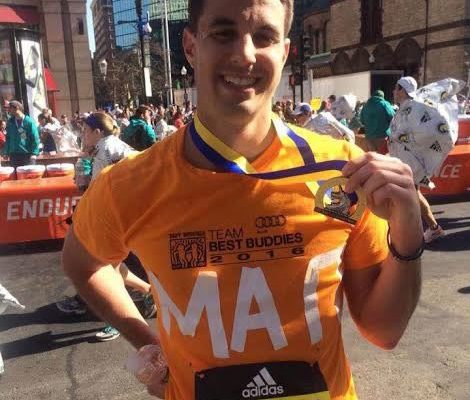 Matt Gordon, the Director of Campus Fitness and Recreation, successfully completed the Boston Marathon. This was Gordon’s second marathon. His first was in Newport, RI in the fall of 2014. Ever since he moved to New England in 2011, he dreamed of running in the Boston Marathon.

“I wanted to continue the family tradition of running in the most prestigious race in the world,” said Gordon, who wanted to run for a few reasons. His great uncle ran the marathon in 1981.

Additionally, he wanted to run for a charity that was meaningful to him.  It took two years and several interviews, but Gordon was awarded a bib this year from Best Buddies. This is especially important to Gordon because he advises the organization on campus.

After being offered the bib in January, Gordon only had two and a half months to train for the race. Best Buddies signed him up for the Marathon Coalition, which is a group of coaches that organize a training plan and invite everyone to run with them on Saturdays. This was advantageous because they trained each weekend on the marathon course so he was able to practice where he would be racing on Marathon Monday. Aside from this, Gordon ran three other times a week, often waking up at 5:30 or 6:00a.m. in the morning and running along the Charles River before work.

“A great mental test, and that’s part of the reason I really like the marathon.  Of course it is physical, but the mental toughness one needs to exude in training is often overlooked.  Getting up and going for a run, whether it’s dark, cold, rain, snow, etc., it’s about pushing through it and keeping that goal that you set.  For me, it’s just as much mental, as it is physical,” said Gordon.

Gordon said that the overall experience of the marathon was amazing. He thoroughly enjoyed every second of people cheering him on. As his coach said, “It’s the closest thing you’ll ever feel to a rock star.”

Gordon said that seeing people cheering for him for the entire length of the race is emotionally uplifting.  Although he suffered from cramps from mile 17 on, the fans kept him going.

After fully recovering, Gordon thinks he will find another marathon to compete in. “Going back to my competitive side, I would love to knock some time off my best mark. I will go back and look at my nutritional plan leading up to race day and evaluate what I could have done differently to prepare my body for the rigors of 26.2 miles. I will also keep holding myself to the goals I set, as I believe there are so many transferable areas of marathon training as there are to my career in higher education,” Gordon said.

Aside from Gordon, Merrimack College had two other Boston Marathon Runners, Sarah Sceery (ODAR) and Kerry Cameron (Sodexo nutritionist) whom he wanted to congratulate.