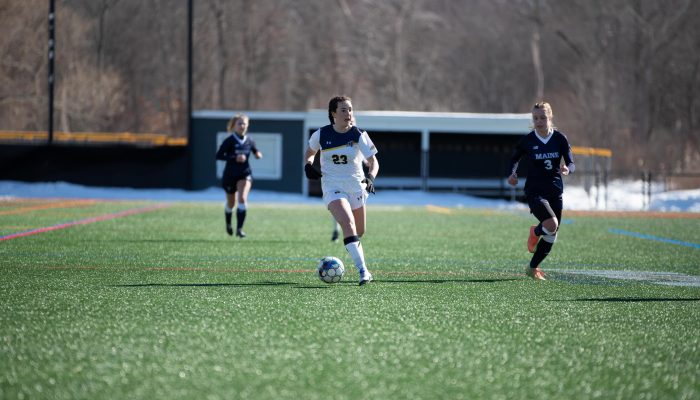 After not playing a game since the fall of 2019, the Merrimack Women’s soccer team was finally able to make it out onto the pitch this past Sunday to play against the University of Maine Black Bears. Merrimack was clearly the better team in this matchup, controlling the possession for most of the game.

The Warriors started off the scoring early in the first half on a phenomenal free-kick goal by junior captain Becca Harty from just inside the half. Just like in the first half, Merrimack struck early again in the second half on a goal by freshman Abigail Cieri on one of the seven corner kicks that Merrimack had throughout the game.

On the other side of the field, senior goalkeeper, Megan Langlois, played a great game, highlighted by seven saves made on the day, including one inside the six as well as a save on a rocket shot to the top right corner.

Merrimack starts this season off 1-0 and will be looking to make that 2-0 on the road against UNH today, Wednesday, February 24, before returning home to play Saint Francis the following Tuesday.