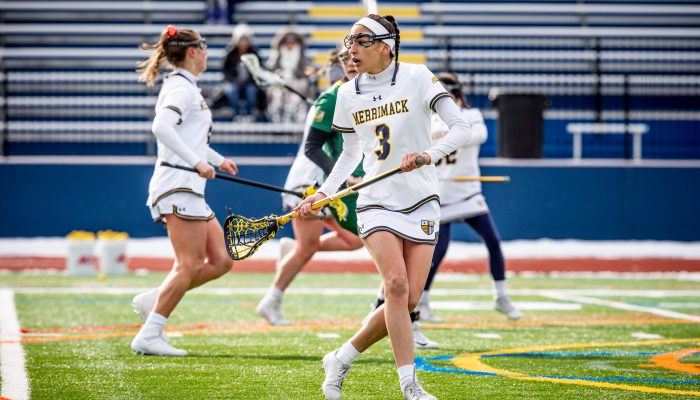 Merrimack Women’s Lacrosse opened up its inaugural Division I season with back to back competitive losses; falling 19-11 at home to the University of Vermont and 15-9 on the road against UNH. Third time proved to be the charm for the Warriors on the road in Buffalo New York, as they faced off against Canisius College. The Warriors emerged with a 10-9 win coming off the stick of Junior Meghan Dzailo with just 19 seconds to go; stunning the Golden Griffins, thus, earning their first D1 win in program history. Through the first three games of the season it is clear that the Warriors have a unique mix of youth and experience that should prove promising down the stretch. Out of 37 roster spots, 10 belong to freshmen, 9 to sophomores, 11 to juniors, and 7 to seniors.

Freshmen Attacker Natalie Calkins has established herself as a key contributor and future star for the Warriors. Through the first 3 games Calkins leads the team in goals (8), is tied for 3rd in assists (1),  2nd in total points (9) and also leads the team in shots (16) and shots on goal (11). Calkins’ strong start has gained national recognition earning her NEC Rookie of the Week twice in the first two weeks of the season. In addition to Calkins, fellow freshmen Sophie Scearbo, Olivia Piazza and Kelly Corrigan have also emerged as key players for the Warriors. These freshman standouts are not without help from a strong upperclassmen presence.

The junior trio of attacker Haley Bartlett and midfielders Meghan Dzailo and Taylor Darrell have accounted for 12 of the teams 30 goals. Senior attacker Ally DaCosta leads the team in assists (7) and points (10), while senior Danielle Schweitzer holds things down on the defensive end leading the team in caused turnovers with 4. Schweitzer’s defensive efforts earned her NEC Defensive Player of the Week honors in the opening loss against UVM.

The Warriors look to grab their second win of the season when they head to Niagara Falls, New York to face off with Niagara University on Friday, February 21. Looking to watch the Warriors in action? They return home to Duane Stadium on March 10 to face off against their first in-state opponent Holy Cross at 4:00 p.m.