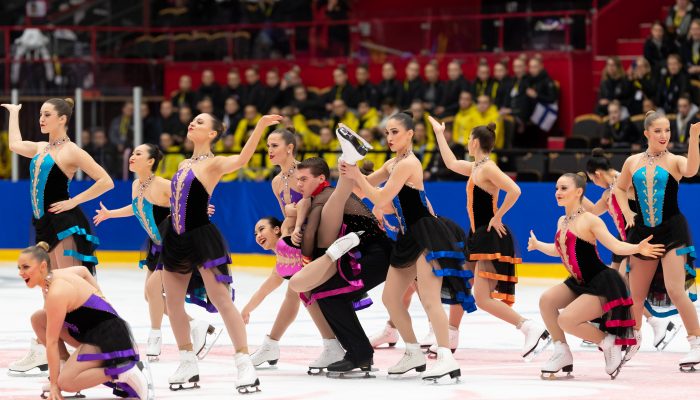 Two Merrimack College students represented the U.S. at the International Skating Union 2019 Mozart Cup and competed for Leon Lurge Trophy over winter break. The students, Annemarie Schmid and Ava Dimmick, compete with The Haydenettes, a synchronized skating team based out of Lexington, Massachusetts. The team came in 5th place in the Mozart Cup in Salzburg, Austria, and earned a bronze medal at Leon Lurje in Gothenburg, Sweden.

Both Dimmick and Schmid dreamed of being a part of the Haydenettes after they saw them perform years ago. Ever since watching them compete, the two have been working very hard towards making the team. After years of dedication and commitment to training and trying out, they both received emails congratulating them on their invitations to join the Haydenettes.

“Making the Haydenettes was such a big deal for me. After my tryouts in my high school senior year, and when I got the email in March with my acceptance I cried in sheer joy and happiness,” said Dimmick.

These major successes did not come easily, though. The competitions over winter break included 13 other teams from 12 different countries and required years of time consuming, rigorous training.

“We do nine hours of practice on ice every week, which is four days a week. On top of that, we have two days with the whole team training in the gym,” explained Dimmick. “Annmarie and I go an extra day for one-on-one training with the team trainer, Mike Cook.  We do a lot of lifting, mobility, strength and conditioning, as well as ballet.”

Schmid says that pain and injury is just part of the game, and that skaters are at risk for “concussion injuries if one of the dancers falls from the air.”

“It can get really ugly. Also, we get some pretty serious scars from skating blades since we are so close to each other,” Schmid added.

Dimmick, Schmid, and the Haydenettes will compete two more times this season. The first competition is March 1-2 in Michigan, and the second is April 12-13 in Finland.

Schmid says that her goal is not only to “qualify for the World Championship in Finland,” but to also get on the “podium and collect a world medal.”

When they compete internationally, they also got a chance to explore the cities of Salzburg and Gothenburg in their free time on the trip. Schmid called the view of the snow covered mountains in Salzburg “spectacular,” and Dimmick said that taking the ferry everywhere they went in Gothenburg was a very different and great experience.

When they’re not fulfilling their dreams on the international stage, Schmid studies Biology and Dimmick studies Health Sciences at Merrimack.