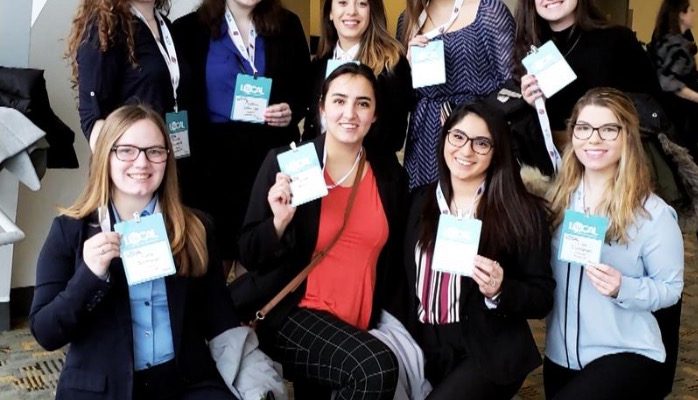 Many of Merrimack’s clubs provide members with the opportunity to travel as a group, often times leaving them with newfound excitement for their field. Most recently, Merrimack’s Society of Women Engineers spent a long weekend in Baltimore, Maryland, followed by the Investment Fund travelling to New York City for a week. These trips were made possible by funding from Merrimack Financial Group, the Mucci Lab Fund, the Office of Student Involvement, and Dean McGowan. Students benefited from networking with professionals in their field of study and were inspired by the possibilities of their futures.

On February 7, 10 female students from Merrimack’s Society of Women Engineers flew out of Boston and landed in Baltimore to begin their long weekend of networking and empowerment. The conference weekend consisted of various workshops and presentations, as well as a career fair that enabled the aspiring engineers to get a taste of the directions they could be headed in.

Sophomore student Brittney Tabicas reflected on the number of different companies that were represented at the fair, and her eyes were opened to all the different paths she could take in the world of engineering.

“The whole conference was so empowering because it was all women in STEM and the age range was so diverse. There were other young female students like us there, and then there were moms. The feeling of empowerment was very evident in everything that we did, and I felt bonded to these other women who share my goals,” Tabicas said.

A few weeks later, Merrimack’s Investment Fund headed out on March 19th for a six-hour train ride to NYC. Fourteen students accompanied by professors Mary Papazian and Fan Chen spent five days in the Big Apple. Throughout their trip, the fund met with alumni and executives from Goldman Sachs, Citibank, and other prestigious financial services companies. They attended interactive sessions and learned about how these professionals got to where they are today. Additionally, they attended breakout panels and were presented with ample networking opportunities.

Later in the week, the Investment Fund attended an alumni reception with distinguished Merrimack donors, which was the time to showcase all that Merrimack has done in the time since the alumni graduated, as well as to share the school’s plans for the future. Student successes, building renovations, and business innovations were showcased, demonstrating the progress Merrimack has made in the past few years alone.

The highlight of the trip entailed the Investment Fund winning first place in a Growth Portfolio competition out of sixty other colleges and universities from across the country. This was the most renowned award given out that week and a huge accomplishment for Merrimack’s Investment Fund, which has only been an established organization for one year.

Papazian, who oversees the fund, said, “The students have been working hard all year, and we’ve been practicing investing wisely. This was well deserved and absolutely a great accomplishment.”

Merrimack sophomore Hannah Link reflects on her experience and is looking forward to going on the same trip in her next two years of school. When asked what her biggest takeaway from this trip would be, Link responded, “It opened my eyes to so many possibilities and niche careers in finance. It gave me confidence, especially as an aspiring woman in this male dominated field.”

Students are incredibly proud of the award they received, and are grateful to have experienced various financial cultures while catching a glimpse of the world of opportunities that is finance.

The opportunity to go on trips like these through organizations funded by our school is so special. Students benefit from these experiences on many levels, not only gaining experience in a field they’re interested in and in a new place, but also on a more personal level. Students on these two trips alone were touched by the messages and advice given to them by successful individuals, those who were just like them years ago. Most renowned people at these conferences preached that young adults should say yes to every opportunity to travel like this and explore new areas. When they were in our shoes they were doing the same, which contributed to much of their successes today.