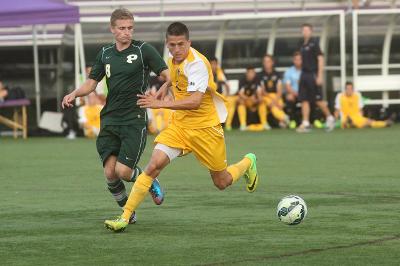 The Merrimack men’s soccer program has enjoyed a lot of success in recent years. They have been one of the top teams in their conference (Northeast-10) and are looking to continue that as they head into the final stretch of their 2014-2015 regular season.

Throughout the 14 games that the soccer team has played they have earned an overall record of 10-2-2 and with a NE-10 record of 5-2-2 which is good for fourth in the conference. The Warriors have had key wins against St. Michael’s, Assumption, and a tie against Southern New Hampshire who they played last fall in the NE-10 finals.

“So far I think it’s gone pretty well. We’ve played well in just about all of the games,” coach Tony Martone said. “We’ve had a couple of tough losses down at Southern Connecticut where we gave up a couple of late goals, and a tough loss at Lemoyne late in overtime with a couple of minutes left.”

“Other than that we’ve played well. A lot of guys are stepping up and contributing,” added Martone.

With the success that Merrimack has had, most of it has come on home field. The Warriors have not lost and own a 6-0-1 record at Martone-Mejail Field. On the other hand, Merrimack hasn’t seen the same success on the road with a 2-2-1 record with their only win coming at Bridgeport.

“We’re trying to figure out if it’s something psychological or what the reasons are,” explained Martone. “There is really no excuses. We just need to hopefully find a way to start winning on the road.”

The roster this season sees some new faces in the starting lineup including Juan Meza, Michael Dushman, and Rui Cardoso. Many of these new faces have contributed nicely to the squad including Dushman who has scored two goals with both of them being game winners.

“They are great kids and have made the transition to the college game,” said Martone. “There are also some other players that are doing well, Rui Cardoso another freshman that has done good for us. We also have a transfer student, Jaime Torres, who has also given us quality time and is certainly contributing.”

“You really need to have a good mixture of older, more seasoned player along with young blood to give us some quality minutes whether it’s coming off the bench or starting and playing 90 minutes,” Martone explained.

The Warriors have had great goalkeeping the past three seasons thanks to senior Jose Silva. Silva has posted 35 wins in his career as the Merrimack keeper and has posted 24 shutouts. He has really been the backbone of the defense and the team for that matter.

“Jose has been a tremendous part of our success that we’ve had the past four years,” explained Martone. “He’s been tremendous. He was an All-American his first year playing. This year he is having another solid year, and has been playing exceptionally well as of late.”

This season the team has stressed the philosophy of playing just like that, a team. They have joined together and have bought into the syatem of being a unit whether it’s on or off the field and it has helped them greatly. The team has also continued to develop it’s highly skilled style of play.

“I think this year they really bought into the philosophy of playing as a team, and really supporting each other on and off the field,” Martone said. “We do stress the team atmosphere and playing as a team and doing everything together as a team. That’s a big part of the key to our success.”

“We have a group of players right now that can play some really attractive soccer. The skill level has improved considerably year to year and we have a fairly highly skilled team,” Martone explained.

Unlike recent years the bench has been very deep this season. Different guys are able to step into games and really have an almost seamless transition and have contributed nicely. It’s also helped to give guys a rest and help the team have consistently fresh legs.

“It’s been absolutely great this year,” Martone said. “This year is one of the first years that I can honestly say that we have guys coming off the bench that have been interchangeable with the starting players.”

Merrimack ends it’s season with four games in which three are on the road. It’s a chance to get back and to improve the road record along with establishing their presence in the difficult NE-10 conference.