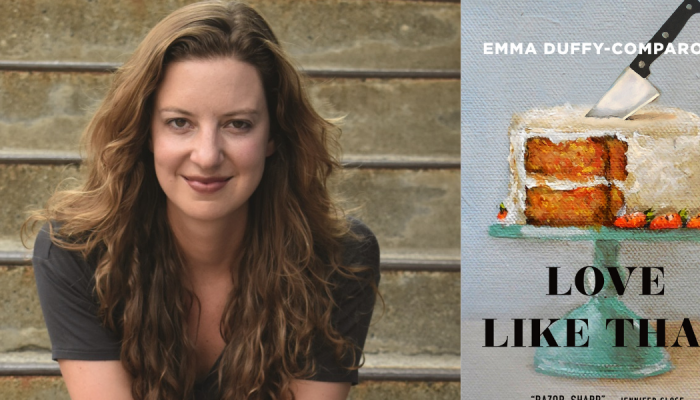 When Emma Duffy-Comparone, assistant professor of creative writing, began penning short stories as an undergraduate, she didn’t imagine that two of them would end up in her first published book.

Her debut book, “Love Like That,” comes out in March and includes nine short stories that all focus on women and relationships. The collection, published by Henry Holt & Company, has already been included on top fiction lists. Vanity Fair included it on its Best Books to Buy for Valentine’s Day list in February, while Vogue added “Love Like That” as one of its picks for March on its Best Books to Read in 2021 list.

The book cover features an illustration of a meat cleaver stuck in a heavily frosted cake with a missing piece. Critics are calling it, “razor sharp,” thanks to its honest portrayal of flawed women wrestling with complex relationships—many of which lack clear-cut resolutions. While Duffy-Comparone wrestles with the “sharp” label—“Have you ever heard a man called sharp?”—she agrees that the characters in “Love Like That” juggle a lot of issues that they address head on.

“Any good book I can think of – no one wants to read about a perfect person. It makes for pretty boring fiction,” Duffy-Comparone said. “The more flawed you are, the more relatable you are. And the more mistakes you make, the more your story unfolds.”

Duffy-Comparone did not write her stories as a linked collection and said they were never meant to adhere to a single theme. As is the custom, the stories had already been published in other literary journals before her agent sent out the manuscript. “Love Like That” sparked a bidding war among major publishers, and as part of her deal with Henry Holt, Duffy-Comparone is working on a novel.

This story was originally published in the Merrimack College Record on March 11, 2021.