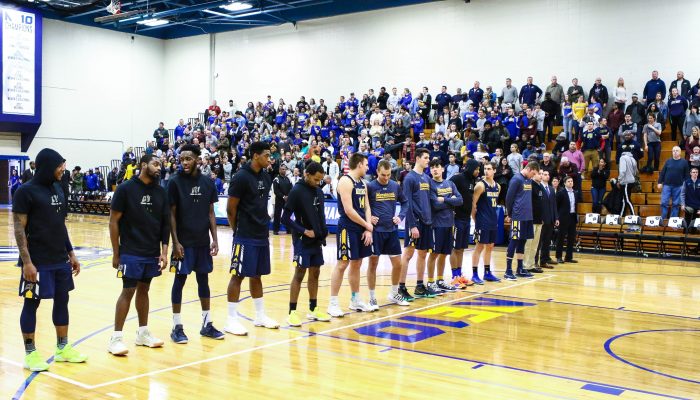 For the first time in 19 years, the Merrimack Men’s Basketball team is Northeast-10 Conference champions.

The Warriors finished second in the NE-10 northeast regular season standings (22-10, 14-7 NE-10) behind the Saint Anselm Hawks (25-5, 18-3 NE-10), but came alive in the conference tournament. Merrimack was the No. 2 seed in the northeast and earned a bye straight to the quarter finals. Merrimack squeaked by the No. 3 southwest-seeded Adelphi Panthers 83-81 on the back of junior point guard Juvaris Hayes who led all scorers with an astounding 46 points.

After defeating Adelphi, Merrimack advanced to the semifinals to take on the No. 1 southwest -seeded Le Moyne Dolphins. The Dolphins (18-10, 14-6 NE-10) finished first in the NE-10 southwest standings, but MC was able to advance past them to the tune of an 84-77 victory on Mar. 6 setting up a date with the University of New Haven for the NE-10 Championship.

With Merrimack joining the Northeast Conference and moving up to Division-1 in 2019, their matchup with New Haven would be their final opportunity to win a NE-10 trophy. It was also their first time advancing to the final game of the tournament in 19 years and the Warriors wouldn’t disappoint.

Merrimack and New Haven competed in an extremely defense-heavy championship game, but it would be the Warriors who would come out on top of the gritty contest, 51-46 to win the school’s first men’s basketball Northeast-10 championship since 2000. Senior forward Ryan Boulter led the way for the Warriors scoring a game-high 17 points, including five three-point shots. Hayes might not have had another 40-point performance, but he made an impact in all facets of the game recording eight points, nine assists and 10 rebounds. Both Warriors earned spots on the NE-10 All Championship Team, and Boulter even was named Most Valuable Player of the final game.

The MC Men’s Basketball team clinched its third-straight trip to the D-II NCAA Tournament, and although they fell in the first round, this team has left its mark in Merrimack history. The Warriors hadn’t won an NE-10 Championship, but in their final year in D-II were able to get it done for only the third time in school history. Seniors Troy McLaughlin and Boulter were a part of 76 wins over their four year careers and helped lead the Warriors to a school-record 22 wins this season.

Hayes still has one year of eligibility remaining in his college career, but has already cemented himself as one of the best players in Merrimack College history. The junior guard finished the season with an astronomical 618 points, 217 rebounds, 212 assists and 125 steals to become the first player in NCAA history at any level (Div. I, II and III) to record over 600 points, 200 rebounds, 200 assists and 100 steals in a single season. He has picked up an exuberance of accolades this season earning preseason All-American, NE-10 Defensive Player of the Year, All-Conference, All-Region, All-District and is in the running to be named a 2018-19 All-American still.

As Merrimack ventures into its first season in D-I next year, it returns almost the entire roster. Although they can’t compete in the playoffs for four years due to NCAA rules, the Warriors are primed to make noise for years to come due in large part to the success of the 2018-19 team.