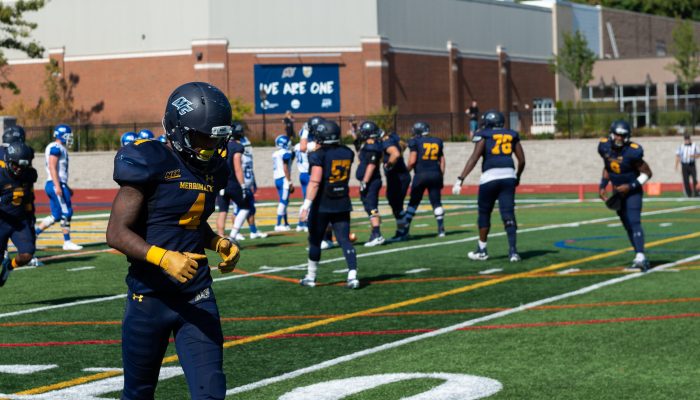 One of the first things one sees pulling in to Merrimack College is either the football stadium or the hockey rink. It is no secret that athletics at Merrimack have always had a strong presence. Over 700 Merrimack students are athletes.

The Men’s and Women’s Ice Hockey teams are both part of Hockey East and compete against big-name schools like Boston College and Northeastern. Hockey games consistently prove to be one of the most exciting and popular events on campus. The Men’s Soccer team and Women’s Field hockey teams have each won their conference championships for the past two years. Men’s Lacrosse won two back-to-back DII Championships. Cross Country/Track athletes have placed in several top ten spots during meets, which helps put Merrimack on the map.

Why does all this matter? As a Division 2 school, Merrimack shined. Many of its athletic programs were excelling in their sports and attracting more and more student athletes. Shining as a D1 school in Northeast Conference will be a challenge, but Merrimack athletes are ready for it. Most student athletes considered not only the scholarships available at schools in addition to academic quality, but also the school’s division when deciding where to go.

“Originally, when I was looking at Merrimack, I was under the impression that it was going to be D2. Then a few months after I committed, I heard rumors that they were transitioning to Division 1 eventually, but I didn’t think it would happen so fast,” said Alexa Tejed, a sophomore on the swim team.

The swim team is unlike many of the other sports on campus because it has only been around for a few years. It started with only three people, but has now grown to 25. While participation in the program has flourished, they are still fighting to get their names out there and win meets.

“I was a bit nervous when President Hopey officially announced the transition, as it occurred sooner than I thought it would,” said Kendra Doty, a junior on the swim team. Doty was nervous about the transition to D1 and said she expected to live out her college swim career within the NE-10, but became excited by all the opportunities for great competition within the NEC.

“Merrimack becoming division one, from an athlete’s perspective, gives us a lot of hope for a greater and more equal respect in each of our sports. The idea behind Division1 is that we’re training and competing at a higher level that makes us push ourselves to higher point for our future goals,” said Madison Rawnsley, who is a sophomore on the swim team. “It’s our hope that this new title brings us greater challenges to work through and therefore when we reach our end goals, both as individual athletes and as teams. The rewards will be that much sweeter. Merrimack certainly has a bright future ahead in division one athletics.”

Since Merrimack started the transition to D1, other fall sports have already been asserting their place and showing the world that they can compete at a high level. The football team won their first D1 game on August 31 against VA Lynchburg. Women’s Soccer beat a longtime favorite team University of Vermont on September 1.