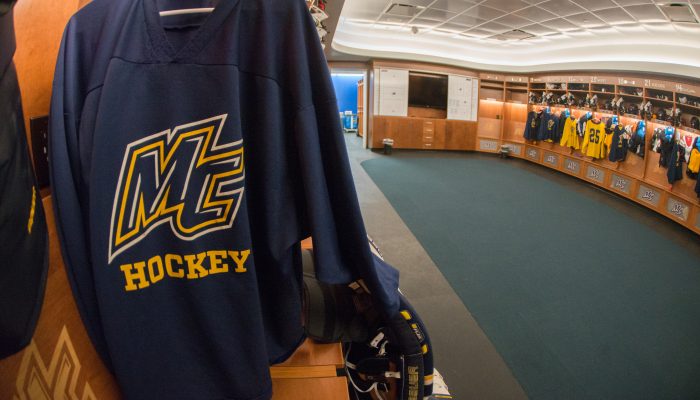 2018 Merrimack graduate, Jace Hennig, just began his first season playing hockey in Germany. Hennig is now a Husky instead of a Warrior as a member of the DEL2’s EC Kassel Huskies organization. DEL stands for Deutsche Eishockey Liga, and DEL2 is the second level of professional hockey in Germany, right below the DEL.

Hennig had a large impact on and off the ice during his tenure as a Merrimack men’s hockey player from 2014 up until his graduation, thanks in part to his determination, wide-ranging skill sets, and positivity. Hennig played 148 regular season games, carried a stat line of 38 goals and 41 assists, and was good for 79 points.

Merrimack goaltender Craig Pantano spent his first three seasons with the Warriors as Hennig’s teammate. As someone who spent a great deal of time on and off the ice with Hennig and his many teammates over the years, Pantano can speak to how dialed in Hennig was in everything he did.

“I may be a little biased because I enjoyed my time with Jace the last three years very much,” Pantano said. “As a teammate and a person he always wanted to have fun with what we were doing, but there was always a learned purpose of that activity as well. He was so balanced in his educational focus as well as athletically. He excelled in both. Personally, he was one of the guys I had the best connection with.”

When asked about the next step in Hennig’s career, Pantano displayed glowing excitement for his former teammate.
“I think Germany was a good choice for him. He had other options, but there is a lot of potential good for him there. He has the ability to move up and showcase his talents on the front end,” Pantano said. “Also, he’s got a little German in his ancestry so how cool is that? What an opportunity to live in Europe and experience a totally different culture. I think he’ll do great over there considering his great forward skills.”

Brendan Albertson, a fourth year student manager for the hockey team and current senior at Merrimack College, had some appreciative words for Hennig as well.

“Jace was always a good guy to me as a student manager. He would always look out for me as someone on the team and appreciated my presence,” Albertson said. “On the ice, he was contributing all of the time. The 79 points he accumulated over four seasons at Merrimack shows that he did well in D1 hockey.”

Albertson also had some positive things about Hennig’s decision, given his knowledge knowledge of NCAA players’ life after college hockey.

“I like his decision to play in Germany. There are far more opportunities to play professional hockey in Europe, and several Canadian and American hockey players take advantage of playing pro in Europe,” said Albertson.

It’s all about the fit, and Hennig ran with the opportunity to play in Germany.

Ryan Salvaggio, a junior at Merrimack, has attended quite a few Merrimack hockey games over the years. His grandfather owns ticket packages for the teams home games, and Salvaggio attends them with various members of his family.

“I think Jace’s departure will definitely affect the team, he was always a productive player whenever I went to a game and did the little things well that you don’t see come up in the box score after the game’s over,” Salvaggio said. “I don’t feel like it’ll be devastating to the team, but his presence is definitely gonna be missed.”

Not only does the point production need to be filled in some capacity, but Jace’s 148 games are second-most in Merrimack Men’s Hockey history, just three games behind his former teammate Marc Biega, who graduated with Hennig in May. Despite losing such a big piece of the roster, it is clear that Jace had a positive impact on and off the ice in his time as a Merrimack Warrior.