Merrimack Football Gets a Homecoming Win 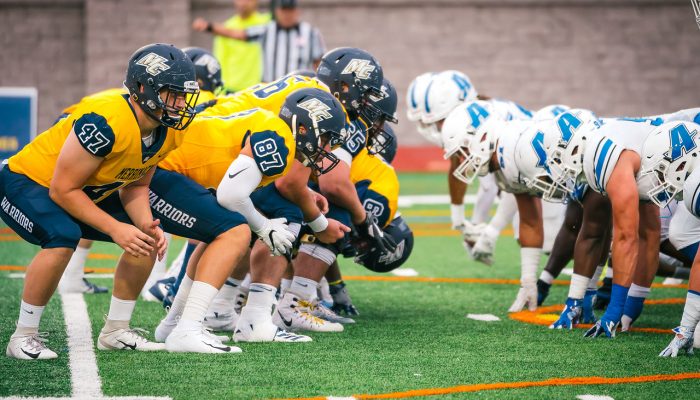 The Merrimack College Football team took on the American International College Yellow Jackets on Homecoming Oct. 27. Merrimack came into the game 3-4, with a two game win streak that would be extended following a 14-0 grind it out win for the Warriors. The Yellow Jackets dropped to 0-7 following another disappointing performance in a nightmare season for American International College.

The playing conditions were wet with steady rain throughout the game. There were 72 rushing attempts between the two teams in this run heavy, defensive football game.

Sophomore Quarterback Cam Hayes got the start for the Warriors and had an impressive game. Hayes completed 16 of 21 pass attempts for 202 yards and a passing touchdown. He also ran the ball 14 times for 44 yards and a touchdown. “Hayes was the player of the game in my opinion. He got the offense going in an environment that favored defense,” said Merrimack student Sam Rebinskas.

The game started with three three-and-outs before Merrimack Kicker Cody Resendes missed a 34 yard field goal in tough conditions on Merrimack’s second drive. The scoring drought finally came to an end with 48 seconds left on the clock in the first quarter. Hayes ran up the middle for a seven yard touchdown to take the lead.

On the following possession American International College would move down the field with their best drive of the game. The drive ended with a missed 36 yard field goal by Gianni Romeo.

Cam Hayes and the Merrimack offense would find the end-zone on back to back drives after a slow start. On the second play of the drive Hayes found Demers for a 62 yard completion to put the Warriors in the red-zone. Hayes would capitalize two plays later on a seven yard touchdown pass to Spence. “Merrimack got off to a slow start but eventually found their groove in the first half, highlighted by a huge pass to Demers,” said Merrimack student Stephen Mottram.

The scoring would conclude with that touchdown before halftime as both defenses were lights out. The Merrimack defense held AIC to 2.2 yards per carry while the Warriors were only able to conjure up 2.4 yards per carry. With the rainy climate both offenses were inclined to run the ball, yet neither team could get the running game going. “Both running attacks were non-existent, luckily Hayes was able to throw the ball well despite battling tough weather,” said Merrimack student Louis Cusack.

What decided the game was the superiority of the Warriors passing attack. Merrimack gained 202 yards in the air while AIC only gained 55 passing yards.

Merrimack was in the driver’s seat early on and kept it that way throughout. Both teams played clean with zero turnovers in the game resulting in a fast paced, rather uneventful homecoming win for the Merrimack Football Team.