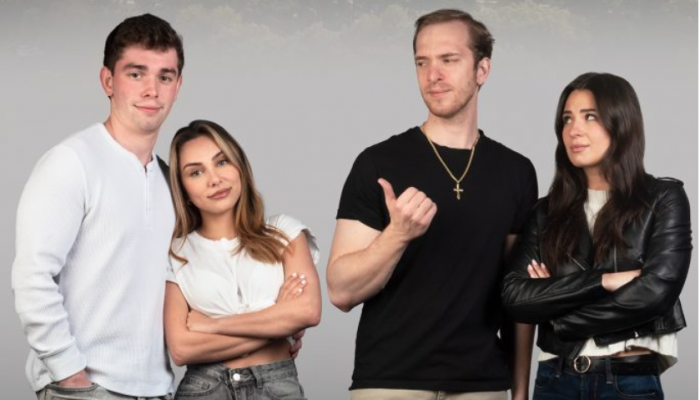 Three Merrimack College students spent the spring 2021 semester creating a feature length film, “Extra Credit,” which will premiere on May 11 at 8:00 p.m. outside the St. Thomas and St. Ann Apartments. The comedy follows two senior students who are at personal and professional cross-roads as they near their graduations from college.

“It’s been the busiest three months of my life,” said Em Wood ’23, who is the director of Extra Credit and a double major in Theater Arts and Communication.

Wood, along with Stephen Mottram ’21 and Scott Neville ’21, who wrote the script and are also Communication students, had multiple 10 and 12 hour days dedicated to filming the project. The team regularly filmed scenes during the early morning hours or really late at night to avoid crowds, which was necessary due to campus Covid-19 protocols.

“For me making this film was just to take a stab at something I thought Steve and I had potential in,” Neville said. “I know if we didn’t try we would’ve always wondered if we could be successful or not. What pushed us over the edge was a conversation with Charlie Day. When he tells you to make a movie, you have to make a movie.”

Of course making a movie starts way before filming begins.

“The experience was brutal since day one, starting with brainstorming for the script. We had just about a month and a half to write 90 pages of script with very little experience,” Mottram said.

When the script was done, the team spent time casting actors, scouting shooting locations, and working with the Merrimack College administration to get their filming plan approved.

Even though filming has wrapped, the project isn’t over.

“We made this film to submit to film festival to hopefully get us some recognition in the industry, and this project could be our breakthrough. Our end goal and dream is to land a television show with a major network,” Mottram said.

Campus community members who watch “Extra Credit” may recognize a lot of different campus spaces and people in the film. It includes several Merrimack students as actors and extras, cameos by a few Merrimack College faculty members, and even brief appearances by MCTV and The Beacon e-board members, Colleen Mearon and Nicole Fasciano.

“I’m so proud of Em, Scott, and Stephen. I know there were some bumps in the road, but they overcame them to produce something that I think is truly great,” said Melissa Zimdars, who is an Associate Professor in the Department of Communication & Media. “They all deserve a nice long break after pulling this off, but I can’t help but be excited to see what each of them works on next.”

Anyone in the Merrimack College Covid-19 testing protocol can attend the outdoor premiere, but they need to RSVP here.