Merrimack College Shuts Out BU for the First Time 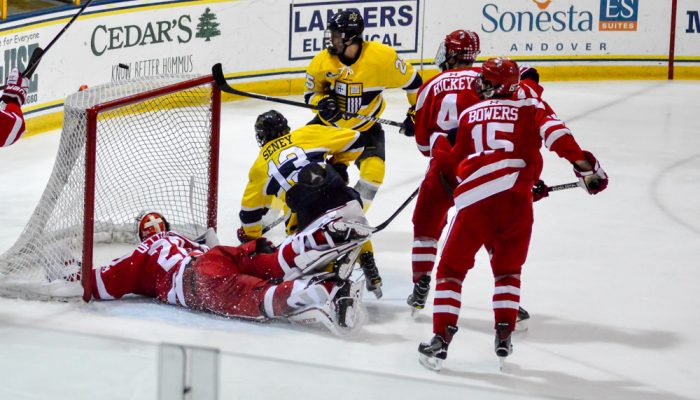 For the first time in the school’s history, Merrimack’s Men’s Ice Hockey team shut out the Boston University Terriers, 4-0. The Warriors have been in the middle of the pack so far this season, going 2-3-0 so far. This, by far, is their best effort and biggest win of the season. In a total team effort, the Warriors accomplished history which can lead to great things as the season goes on.

In Merrimack’s fifth game under coach Scott Borek, the team jumped out to an early 2-0 lead in the first period on their way to making history. In their first 25 minutes of play, they were up 3-0 and it came down to goalie, senior Craig Pantano, and the rest of the team to preserve the lead. The Terriers kept putting on shots to try and bounce back into the game, but Pantano played his best game of the season, stopping 34 shots on his way to being part of history. Pantano has had an incredible season to this point, starting eight games with a .910 save percentage and a 2.56 goals against average. And while Pantano continues to play great, the rest of the team does as well.

The goals were scored by Michael Babcock, Logan Coomes, Johnathan Kovacevic and Laine McKay. With the first two goals being scored in the first ten minutes of the game, the Warriors were going good early. Babcock’s goal would come off a rebound where the Warriors worked hard early to get it done. Coomes, tied for the team lead in points, scored the second goal of the game for the Warriors on a tip-in off a marvelous pass by assists by freshman Jordan Seyfert to give the Warriors the two goal lead early in the first period. Kovacevic’s goal came when Coomes was able to block BU’s goalie from seeing the wrister from the point, giving them the three goal lead which would prove to be more than enough.

At the time of the game on Oct. 20, Boston University was ranked #13 in the nation in the NCAA Division I rankings. The Warriors played the role of underdog in the game, but managed to dominate and come out on top in the end.

“It was really cool to witness history because no one expected us to defeat BU because BU just won the Hockey East Championship in 2017-2018 and are nationally ranked as one of the best teams in the nation,” Joseph Leblanc said. Being apart of the Hockey East always brings a difficult matchup for the Warriors, however they continue to play their hardest.

“The Warriors played with a lot of energy and just outworked BU the whole game. So just watching them outwork their opponent the whole game was my favorite part,” said student Tim Burke. Merrimack’s continued pressure against opponents through hard work and play on a the ice is becoming a staple of their season.

“Don’t sleep on the Warriors, I’ll leave it at that,” Scott Neville said. The Warrior faithful continues to believe and help power the team, which is all you can ask for from the fans. There is plenty of season left for Merrimack, the season is nowhere close to over.

The Warriors are now (3-6) and with one of their biggest wins under their belts, they planning to keep plowing ahead and hopefully continuing their up and down season so far..

Their next three games are against Bemidji State next weekend in Minnesota, with the following weekend they return to Lawler Rink to face Providence.