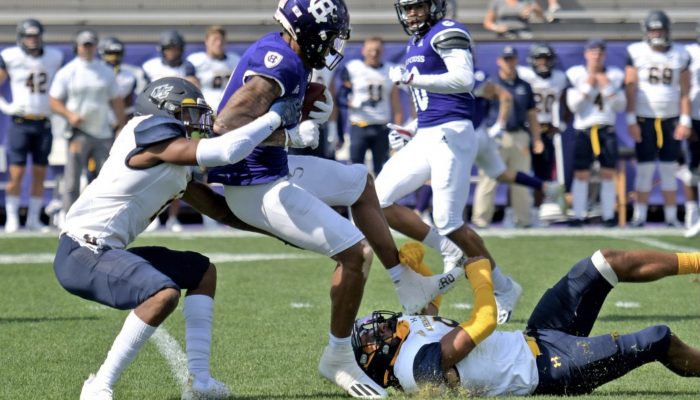 Over the past weekend, Merrimack Football took a short drive down to Worcester to face the #24 ranked Holy Cross at Fitton Field. After Merrimack’s big win over Saint Anselm’s the week prior, the team was riding high into this matchup against a ranked opponent in the FCS.

The Warriors showed they are a team that can put up numbers in a hurry with graduate quarterback, Westin Elliott throwing for 259 yards, completing 24 of the 35 pass attempts with two touchdowns. Elliot continues to stay hot after his impressive performance just last week. Another Warrior that has burst onto the scene is redshirt freshmen wideout Jacari Carter, who brought in 9 catches for 101 yards and scored his first touchdown of the year. The rushing attack from the Warriors was too much for the Crusaders with freshman running back Victor Dawson, rushing for 111 yards on 19 carries, scoring his first touchdown in the early fourth quarter sealing the win for the Warriors. As the Warriors dominated the football field with 459 yards of total offense and having possession of the football for more than 36 minutes, the Crusaders of Holy Cross were no match.

With the offense running on all cylinders the defense wasn’t too far behind, junior cornerback Anthony Witherstone made a highlight reel interception, and took it all the way to the house for a touchdown. This was an overall team effort from both sides of the ball for the Warriors.

Ultimately, the Warriors went on to win 35-21. A win against a ranked opponent in the FCS has the Warriors flying high as this is the biggest accomplishment in the program’s history. The team will need to bear down as they look to remain undefeated against the University of Maine this Saturday at Alfond Stadium in Orono, Maine.