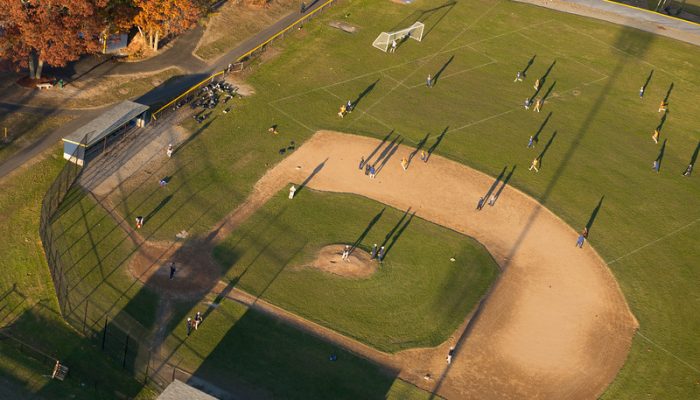 It was tough sledding for the Merrimack College Club Baseball squad as a busy, double header filled weekend saw them drop the first four games of their spring season. On Saturday, it was 11-1 and 9-3 losses at the hands of the offensive powerhouse Holy Cross, while Sunday saw 4-1 and 7-6 losses to a defensively sound Southern New Hampshire University.

The Warriors were out-slugged by a Holy Cross team that is seen as one of the best offenses in the entire American Club Baseball Association, something that is apparent when looking at the scores from both games. However, even with the lopsided scores, team captain and game one starter, Adam Chanley, was able to focus in on a a positive that stood out to him that the Warriors could use moving forward.

“I like to see the team hitting. Putting the ball in play. That’s all you can ask for, things will happen,” said Chanley.

Chanley brings up a positive that was seen throughout the weekend as the Warriors showed good hitting in all four games. However, Saturday it was a tale of two teams as Holy Cross was able to make solid contact and find holes, while Merrimack was unable to catch a break, hitting numerous balls right at Holy Cross defenders.

“Credit to Holy Cross,” Chanley went on to add. “They had some great players. Probably one of the best teams we will face this year.”

Merrimack quickly turned the page in their next matchup on Sunday with SNHU and even though the results were the same as the previous day, it could be seen that there was a different attitude and confidence even surrounding the team in the dugout after the two close games.

“You could tell everyone was still a little rusty against Holy [Cross] across because it was our first game in a while. The SNHU game was much better. Overall more hits and putting the ball in play as well as making better defensive plays is where I saw a big difference which gives me a good feeling in the direction are headed” said alternate captain and outfielder Nick Sanborn.

An 0-4 start to the year is tough for any team, especially when the season is so short and the possibility for making up ground becomes smaller and smaller. However, both Chanley and Sanborn have high hopes and are focusing on the positives as the team heads down the final six game stretch.

“As a group our defensive plays have been pretty good, as well as being able to get the bat on ball. Overall we need to keep working on Stringing hits together and generating some runs to put up on the scoreboard is something we can work on” said Sanborn.

“Our team has been seeing the ball well with around 15 hits in the double header against SNHU. We have a great pitching staff with [Nick] Weir, [Nick] Sanborn, [Scott] Neville and myself as starters and solid players out of the pen. If our pitchers keep the ball down in the zone, mix it up, and with good defense behind us, we can certainly win. If we get consistent with our pitching and our hitting we will be in some ball games down the stretch” said Chanley.

Next up for the Warriors, it’s another dosage of weekend double headers. Saturday they’ll take on the UMass Lowell Riverhawks with Scott Neville scheduled to start in Game One, and Chanley in Game Two. Sunday’s opponent will be the Franklin Pierce University Ravens with Sandorn and Nick Weir scheduled to start. The consensus around the Warriors clubhouse is they feel like these will be the games, especially the ones against UMass Lowell, where their two year winless drought will finally come to an end.