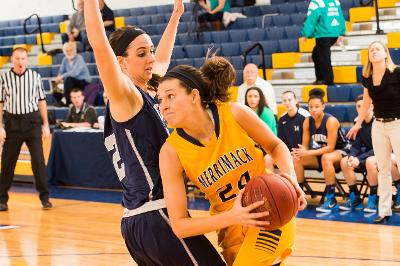 Merrimack men’s and women’s basketball have had a similar years. Their both sporting at least .500 records and are looking to make a playoff push as the season comes to a close in the final month of the season. The men own a 13-10 record and a 8-10 record in NE-10 play. The women, on the other hand, hold a 12-11 record with an 8-10 record within NE-10 play.

The men’s team enjoyed the month of January winning five of seven games all against conference opponents with one loss by just two points against American International. The offense has been there with the team averaging 79.8 points per game. Leading the offense is Gelvis Solano who is averaging 23.5 points per game. On the defensive side it’s been all James Kennedy who is averaging 6.9 rebounds per game. The Warriors are set for their final three games of the season against saint Anselm, Franklin Pierce, and Saint Michael’s. They currently hold the 12th spot in the NE-10 standings.

After having a perfect 5-0 December, the team has combined for four wins between January and February. There wins did come against conference opponents that helped their cause in league standings. The team has seen some steady offensive play averaging 69 points per game. Senior Chole Rothman has been at the helm of the offensive side averaging 14.3 points a game. It’s been all Aria Johnson defensively averaging 7.9 rebounds per game for the Warriors. With two more games remaining it’ll be crucial to win these to games to make a strong push heading into the NE-10 playoffs.