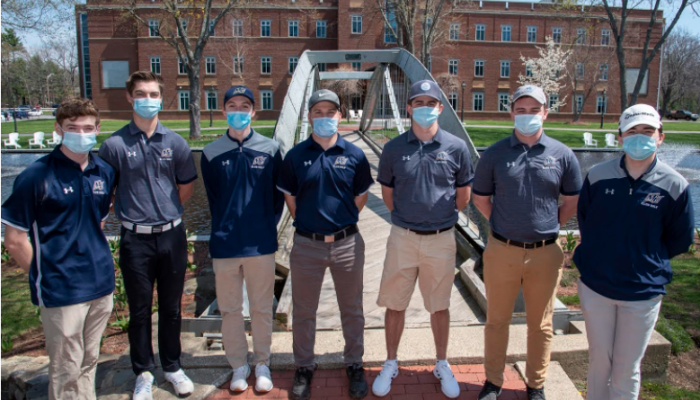 The weekend of April 10-11, Merrimack’s Men’s Club Golf team made history. For the first time ever, the team won the Next Generation Golf tournament. On top of winning the tournament, this is the first year the team has qualified for nationals which will be held in Atlantic City, NJ.

“Congratulations to the Men’s Club Golf team. The weekend of April 10-11 they won their first Next Generation Golf tournament at the Loudon Country Club in Loudon, N.H. Led by senior captain John Russell, they won by fifty shots,” coach Peter Grogan (Merrimack College class of 1963) said in a statement. “Major contributors to the victory were Mark Bissonette, Zach Farrell, E.J. Dzialo, Brendan Loomer, and Angelo McCullough. Noteworthy mention goes to freshman Brad Powers and Chris Lavoie for their exceptional play in their first competition representing Merimack.”

John Russell opened up the scoring on Saturday with a 78, while Angelo McCullough and Brad Powers led the way Sunday, both shooting 75. This is an exciting time for Men’s Club Golf as they continue to make a name for themselves and gain interest across the Merrimack campus.

The Next Generation National Championships will be held at Seaview Golf club in Atlantic City, NJ on April 23-25.