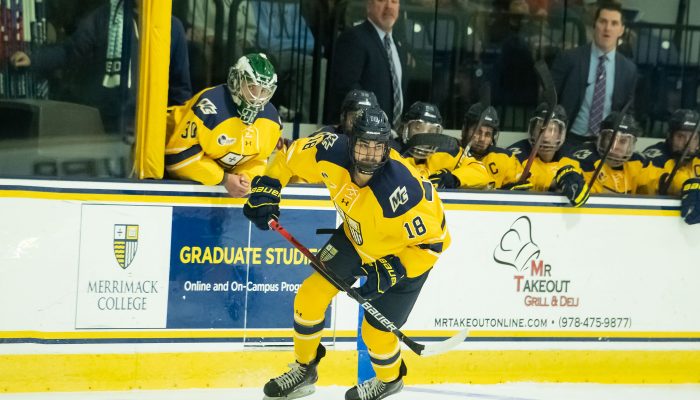 The 2019-2020 Merrimack Men’s Hockey players make a young team. 21 out of the 28 roster spots are filled by underclassmen, with 16 of the spots occupied by freshman students.

Among these freshmen are the two goalies who have split starts so far this season. Troy Kobryn, who piled up 34 saves for the Warriors in their win against Holy Cross, and Jere Huhtamaa, who registered 20 saves in Merrimack’s overtime loss against UNH.

After dropping a pair of games at Lake Superior State, the Warriors opened up the season at home against #15/16 Wisconsin. Over 2,100 of the Warrior faithful flooded into Lawler Rink over Columbus Day Weekend for this early season test. Five different Warriors were able tally goals against the Badgers, including two freshmen, Regan Kimmens and Zach Vinnel. However, the Badgers prevailed 11-5 in the high scoring affair.

In their next game, they travelled to Holy Cross and were able to leave Worcester with a 3-1 victory for the first win of the season.

From Worcester the team travelled to Rochester, NY, to face off against RIT. The team suffered defeat, falling 4-0.

Merrimack was hoping to turn it around as they set north to take on UNH. The Warriors kept pace with Wildcats for all of regulation sending the game to overtime at 3-3, but fell just seconds into overtime. To start the season the Warriors have opened up at 1-5 overall and 0-1 in Hockey East play, however, with 21 out of 28 players being underclassmen, the future looks bright for Warriors hockey. The men return to Lawler Rink on Friday, Nov. 7 at 7:00 p.m. to take on UConn.