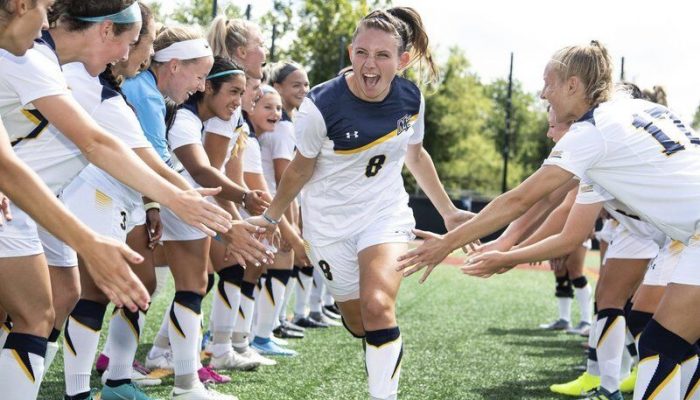 Women’s soccer takes the victory winning 1-0 as freshmen forward Ella Cormier scores her 4th goal of the season in 31st minute of the first half. Assisting on the play was junior forward Molly Murnane and freshmen midfielder Julia Ostermann. Only one goal was conceded for the rest of the game as the Warriors defense was firing on all cylinders, denying Mount St Mary’s any opportunity to score.

To close out the double header of games the Men’s soccer team pulls out a 2-1 double OT thriller beating the Blue Devils. In the 33rd minute of the first half senior forward Frantz Pierrot scores his 6th goal of the season putting the Warriors up 1. Assisting on the play was senior midfielder Stefano Pesenti. The Blue Devils came into the second half poised to tie up the score. In the 62nd minute the Devils find the back of the net and tie the game at one a piece. Both sides took aim at the goal the rest of the way but came up short in regulation. With the game going into OT both teams weren’t giving ground. Not until senior forward Henry Osei broke through the defense scoring his second goal of the season in the 106th minute. For his second assist of the game Stefano Pesenti placed a perfect ball to set up Osei for the game winning goal.

With a few games left in the season, each team is determined to finish the season out on high notes.