Men’s and Women’s Hockey Have Disappointing Seasons, Chances for Redemption During Playoffs 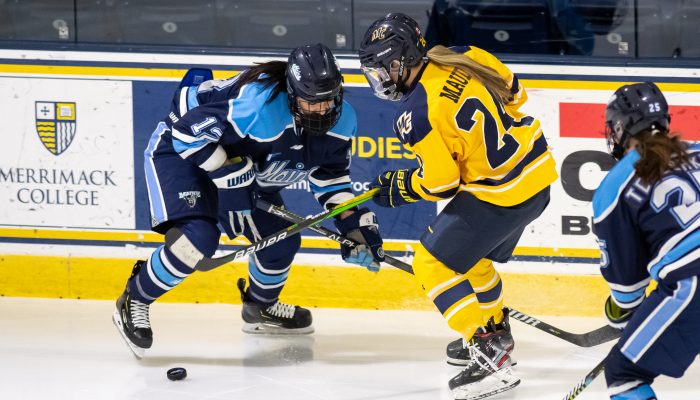 This has not been the best year for the hockey teams at Merrimack College. The Men’s Hockey team is currently sitting at 4-10-2, while the Women’s Hockey team closed out their regular season at 1-15. Fortunately, this year, every team is eligible for the playoffs, so even though the teams may be a little down, they most certainly are not out.

The Women’s Hockey team managed to win one of its first two games of the season against Holy Cross before dropping 14 straight. Although they lost a lot of  games this season, it’s not like they were outclassed by some of their opponents, losing a few close games like a 2-1 loss to UMaine and a 2-0 loss to Boston University earlier in the season. The Women’s Hockey team is only going to be losing one senior after this season, which will hopefully help the team continue to build chemistry with each other for next season. They will open up the Hockey East playoff tournament as the 10th seed and will play UConn on Wednesday, February 24.

The Men’s team will also be competing in the Hockey East playoff tournament this week. They open up as the 8th seed and will be playing the 9th seed UMaine Wednesday, March 10. This season, they were able to get some quality wins against teams like UMass Amherst and UNH. The team also got a couple of points in overtime shootout losses, both to UNH. The team brought in a few transfer players this season and will only be losing three seniors and one graduate student. This will give the other players another year to get better chemistry. The Merrimack teams will be looking to make their mark in the playoffs to end their season in the following weeks.