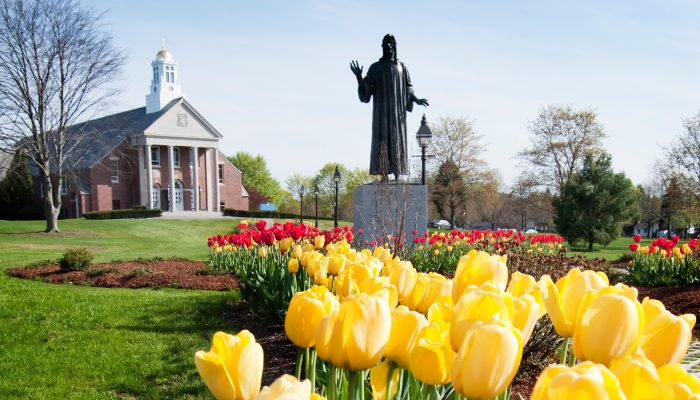 On March 20, the Merrimack College Political Science Department hosted the 19th Annual St. Germain Lecture, which featured Lawrence Mayor Dan Rivera. This event was established to honor the memory of Professor James J. St. Germain, who taught at Merrimack from 1951 to 1981. The event also serves as the induction ceremonies for both the Pi Sigma Alpha, the Political Science Honors Society, and Sigma Iota Rho, the International Studies Honors Society. Each year, a notable speaker is invited to address the attendees about their work and experiences in the field.

In a delightfully engaging lecture, Rivera shared his journey to the mayor’s office and his experiences as the city’s leader during the gas explosions that occurred in Lawrence this past fall. His lecture, full of comical anecdotes and life lessons, described his time as a military police officer in the Middle East, his years as a student at the University of Massachusetts, including his rare experience of being a resident advisor for all four years, and his transition from private sector marketing work into life as a public servant.

Rivera advised the audience to not worry about the things we see coming because it is the things we don’t see deserve our worries in the end, which is in reference to the unforeseen gas explosions in Lawrence. Rivera shared the role he played in managing the crisis. Most notable was the clear empathy he felt for the people affected. While his own family was safe and outside of the affected area, Rivera described his choice to go to one of the shelters in an act of solidarity with the people he represents. Six months after the crisis, Rivera is focused on the long-term goals of the crisis response, including improvement of safety measures and addressing the culpability of Columbia Gas, in a proactive vision after an unforeseeable event.Past speakers in the annual St. Germain Lecture include Seth Moulton (2016), a Congressman in the U.S. House of Representatives, Niki Tsongas (2011), a former Congresswoman, U.S. House of Representatives, as well as other distinguished individuals who are judges, professors, and CEOs.