Martin Out, Who's In? 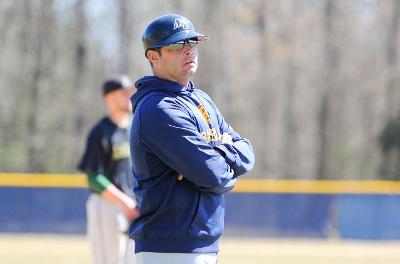 Merrimack athletes are finally back on campus. Our warriors have been doing everything to get back in the swing of things, preparing for their upcoming seasons. The one team on campus having the most challenging adjustment is the baseball team. To everyone’s surprise the team’s head coach, James Martin, has left his job at Merrimack, accepting the job as the University of Rhode Island’s head assistant coach. News of Martin’s departure was bitter sweet for the staff as well as the players. Although the team will miss the coach who lead them to a 30-19 record in 2013, and took them to the Northeast 10 conference championship, being one game away from a regional tournament bid, the baseball program is excited for their beloved former coach and his new opportunity at a Division 1 school.

The report of Martin’s new job came later than the team would have liked, being only a few days prior to move in day. As of now, the team is still in search for Martin’s replacement, however his assistant and head pitching coach of 4 years, Nick Barese, is running all baseball activities until further notice. When asked about why he left, Coach Barese stated, “I think it was a great opportunity for him”. “Him and his wife are about to have a kid and start a family, and just security wise, it was the best situation for his family. I know he definitely loved Merrimack, loved being here, loved the program here, and the school itself and I know it was a tough decision for him, but it was the best decision for him and his family.”

Barese was once another one of Martin’s students of the game while he was playing for him in college. If anyone can relate to how the players feel on Martin’s exit, Barese would be the perfect example. “It’s tough on a personal standpoint.” Barese said when asked about his feelings on the former coach leaving his personal staff and players.

“Coach martin was someone who was my coach when I was in college, someone I developed a really good relationship with, a guy I definitely consider a mentor, someone who taught me a lot about the game, about how to run a program. I know it’s the same thing for the players I know all the players liked him and had a lot of respect for him. We are really going to miss him.”

Despite the lack of a head coach, the team isn’t going to dwell on anything. The program is still playing out as scheduled with all fall ball activities running smoothly. For these warriors everything is business as usual, and they are determined to bounce back from this minor setback. Coach Barese addressed the team’s future and what the spring has in store for them saying,

“Every year our goals don’t change, we’re trying to win the conference championship, and make the regional playoff. Unfortunately you can’t look that far into the future, you got to worry one day at a time. My focus today is on the practice today and what we accomplish today, but we have great leaders in this program, and a great remaining coaching staff. What we make of that opportunity will be determined in the spring, but I’m really excited about the team, we have a great group of guys.”

One of the players certainly affected by the change of the head coaching position is All American, junior infielder, Frank Crinella. Since Crinella has been at Merrimack with Martin at the helm, he’s helped him achieve awards such as NE 10 Rookie of the Year, East Region Rookie of the Year, NE 10 Player of the Year, and not to mention Division 2 East Region Player of the Year. Along with Crinella’s success with Martin, he has also developed one of the strongest relationships with the coach while he was here. When asked about his departure and how this year’s team could bounce back from it Crinella said,

“As a team we will miss Coach Martin. He was a great leader and somebody we could resort to off the field. We will have to come together and respect the game like we always have. Coach left us with great baseball knowledge. It’s up to us to prove ourselves.”

The program seems to be reacting to this tough time appropriately. The program is still running accordingly and the team’s motives for this year haven’t changed without their coach being there. The only question that stands now is who will be leading the Warrior’s into their first game of the season. Coach Barese seems as though he is the most deserving of this job, with the whole program behind him. After asking him why he would be the best choice for the new position, Barese is humbled in his response saying,

“I’ve been here for 4 years and have been a big contributor to building this program and recruiting players. I’ve had a lot of success not only on the field but academically as well as in the community. I certainly believe I’ve earned the opportunity. I think the administration has given me a great chance to prove a lot to them by letting me run this fall season. I’ll prove to them I’m capable of bringing this program beyond to what we’ve already accomplished. I’m very confident that I’m the best guy for this job.”