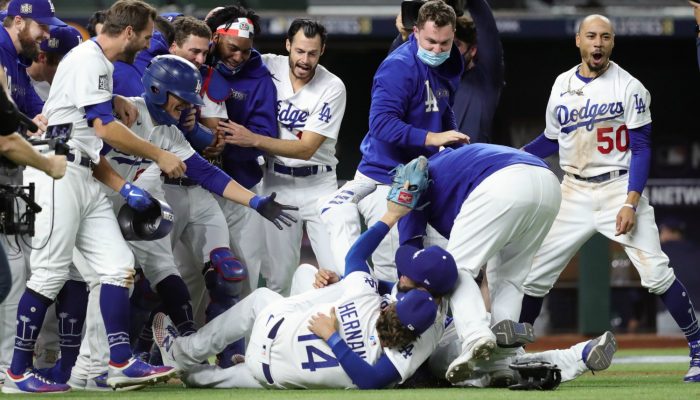 Dodgers shortstop, Corey Seager, won the World Series MVP trophy for his efforts. He hit .400 in the series, smacking eight hits, two home runs, and five RBI with an impressive 1.256 OPS. He proved to be the deciding factor in the batting order for the Dodgers all postseason.

The series clinching-game saw the Dodgers start rookie starting pitcher, Tony Gonsolin, against the Rays ace, Blake Snell. Gonsolin only lasted 1.2 innings, letting up a solo home run to Randy Arozarena. This ended up being the only run the Rays would score all night.

Though the real story from the game was Snell’s performance

Snell was pitching masterfully for the Rays in this make or break it game, only letting up one hit through five innings while striking out nine. All seemed to be going well as he got one out in the sixth before letting up a single. When that happened, the Rays manager Kevin Cash came into the game and pulled Snell, replacing him with Nick Anderson. Anderson ended up giving up the lead almost instantly and it spelled the end for the Rays. Cash’s decision has been questioned since the move happened.

And also for the Rays, this was the improper end to the historic playoff of rookie Randy Arozarena, who smashed almost every single Postseason record in existence, including home runs (10) and hits (29).

The Dodgers went to the World Series two seasons in a row prior to 2019, losing to the Houston Astros in 2017 and the Boston Red Sox in 2018. This was a season of difficulty with COVID-19, but the team with the best roster seems to have finally won.

For someone like Clayton Kershaw, this playoff run sealed his legacy as one of the greatest players in the history of baseball. And for others like Mookie Betts, it was another World Series win to simply cherish.

Congratulations to the Los Angeles Dodgers on the 2020 World Series.