Home > News > Entertainment > Looking Back At TV’s Past: “The Andy Griffith Show” and The Mayberry Father Figure

Looking Back At TV’s Past: “The Andy Griffith Show” and The Mayberry Father Figure 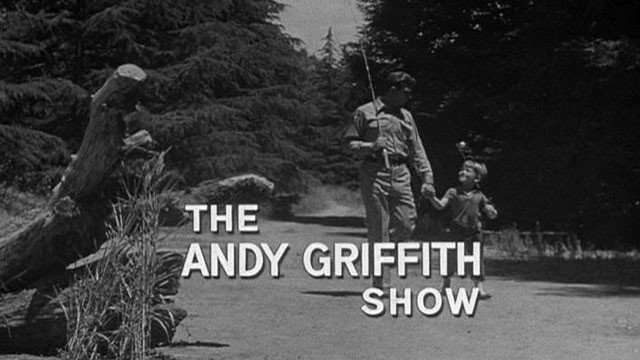 As a child, I was raised on the optimistic lens of The Andy Griffith Show. It was my dad’s favorite show. Every day I came home from school, it was on at 3:00. During my teenage years, I believed it to be a goofy comedy that didn’t fit my taste of Fincher and Nolan films. Now I will take to my grave that Andy Taylor is the gold-standard of television dads.

The idea behind the series was as plain as a peanut-butter sandwich: a man struggling to balance work and life in a comedic lens. Like The Dick Van Dyke Show and The Munsters, the show also included the trope of a bumbling dad. What made Andy Griffith different from the other sitcoms was the focus on being a better father. This approach to the famous trope made the show unique for generations to come.

The main character, Andy Taylor, is a widow that lives with his young son, Opie. He is also the sheriff of a small town called Mayberry. He’s a lone father with the responsibility of parenting both his son Opie and all of Mayberry. Sometimes, he’s better at taking care of one more than the other. This conflicting journey in each episode results in him learning how to be a better, more balanced character. It’s a cliche to say every episode has a moral like Leave It To Beaver, but these morals bring realistic character development to Andy.

His humanity shows in his struggle to balance work and life. His role as sheriff may alienate him as a powerful figure, but he’s the most down-to-earth one in town. Andy Taylor is a peaceful cop that veers away from violence. He refuses to carry a gun in his holster and chooses to resolve Mayberry’s conflicts with words. Andy is the foil to Matt Dillon from Gunsmoke; he won’t shoot someone for being a mean civilian. Instead, he aspires to treat them with wisdom on how to be a better person.

For the first time in seven months, I put The Andy Griffith Show on in my house. I chose to watch my dad’s favorite episode, “Andy Discovers America” (Season 3, Episode 23). This episode is important for the show because it introduces the most important woman to Andy’s future: Helen Crump. The show fell into a habit of putting women into conservative roles in which they support the male characters. Helen, however, took on the symbol of Andy’s moral compass. For the remainder of the show, she is there to keep Andy noble to his morals. Whether she has to knock sense into him or be a supportive shoulder, she makes Andy a better father for Mayberry and television. She helps Andy recognize when he is in the wrong during an episode. Part of what makes Andy a great father is his incorporation of feedback from people like Helen Crump.

In the episode, Andy accidentally inspires Opie to lead a rebellion against their new teacher, Miss Crump, because she assigns too much history homework. Meanwhile, Miss Crump may quit her job due to Opie’s antics. This episode shows Andy trying to be a supportive father, but in return almost ruining the career of Miss Crump. Andy then has to clean up his mess before she can quit. This sounds like a generic sitcom episode. However, Andy’s approach to resolving the conflict is smooth and unpredictable.

In this case, a gun is unnecessary to solve a child’s problem. Andy tells Opie’s rebellion the story of Paul Revere in a three-minute monologue. Opie and his friends, Deputy Barney Fife, and the TV audiences are all fascinated with every word that Andy speaks. It’s not what he’s saying, but how he’s doing it. He’s reeling everybody in like fish in order to gain their interest. His way of telling the story makes history sound dramatic and amazing like a television sitcom. The next day, the young group inspires Miss Crump to stay in Mayberry because they love history now.

This show provides audiences with the Superman of television fathers through Sheriff Andy Taylor. He’s a wise man that aspires to make Mayberry and his family the happiest environment possible. It’s such a happy show that it will have you whistling and snapping along to the closing credits. Andy Taylor embodied the values of a good father for television and for reality.