Kava-NAH: Stop Buying into Politics and Listen to Survivors 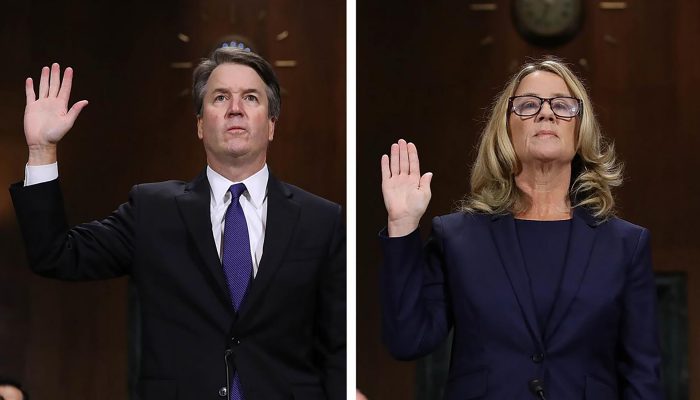 On Oct. 6, Brett Kavanaugh was sworn into the Supreme Court after an extremely close vote from Congress and an uproar of backlash from people across the country. This was a significant moment in United States history that resulted in an all too familiar feeling for women: disappointment.

This fiasco began in July of this past summer when Kavanaugh was nominated by President Trump to replace retiring Justice Anthony Kennedy. This was a powerful move for Republicans, as Kavanaugh identifies as a Republican and consistently sticks to his conservative views. Kennedy also identified as a Republican, but served as the swing vote in many instances throughout his time served in the Supreme Court, such as the decision to legalize same-sex marriage.

Christine Blasey Ford, a professor of psychology at Palo Alto University, came forward with accusations that Brett Kavanaugh sexually assaulted her in the summer of 1982. Originally, she had approached her state Representative Anna Eshoo, and Senator Dianne Feinstein, requesting confidentiality. As Kavanaugh’s appointment to the Supreme Court approached, her identity was released and a hearing was requested.

The hearing of Kavanaugh took place on Sept. 27, delaying his appointment and bringing about a week-long FBI investigation into the accusation. Meanwhile, women and men all across the country protested, and spent countless hours trying to convince their state representatives to vote “no” on Kavanaugh. Despite protests, calls, social media posts, advocacy and angry letters, Congress voted 49-51 to approve Kavanaugh and he was sworn in shortly afterward.

As a young woman in society who is extremely active and engaged in politics, I am disappointed in Congress. I am not disappointed because of Kavanaugh’s party affiliation, but because Dr. Ford was brave enough to be honest, women were brave enough to protest and once again were shut down by America. The feeling of defeat, disappointment and even disgust will be felt time and time again, unless we begin to change.

As we start to live in a world post-Kavanaugh appointment, we need to understand  that sexual assault is still an issue within our society. Brave men and women have come forward throughout the course of 2018, told their stories and sparked movements, such as #MeToo and #TimesUp. However, this does not mean the underlying problems have been solved or that these issues will never occur again.

For many individuals, Oct. 6 is a date that will never be forgotten. Sexual assault survivors have re-lived their own personal trauma as they watch Kavanaugh be appointed to a position of power after being accused of sexually assaulting multiple women. This is not a new experience for many. As a reminder, it is important to put your mental health first as we experience continuous exposure to trauma through social media.

As college students, we are the generation that is going to change the world. It is our responsibility to challenge stigmas, and believe survivors. It’s up to us to listen to people who are brave enough to come forward and tell their stories. Whether they feel accepted in society after telling their story is up to us.