Home > Sports > Merrimack Athletics > Baseball Warriors Take Three of Four From Spartans, Improve to 5-3 Early on in Division I

Baseball Warriors Take Three of Four From Spartans, Improve to 5-3 Early on in Division I 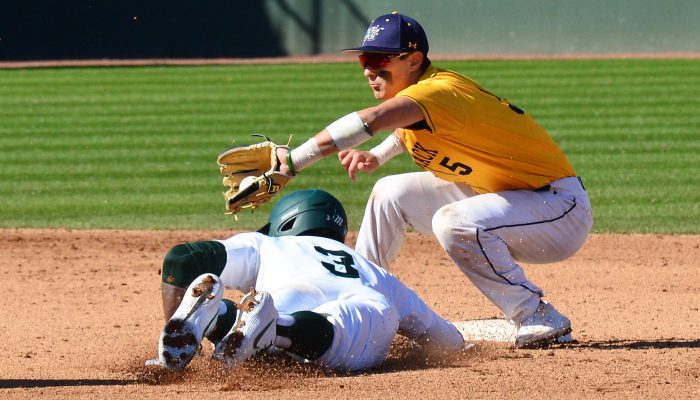 The Merrimack College Baseball team defeated the Michigan State Spartans three times this past weekend, including sweeping a Saturday afternoon double-header, during an early season road trip to Greenville, S.C.

The hot start Warriors are really satisfied with the results heading into a new week, especially with the challenges they’ve had to take on early here in their schedule, says head coach Nick Barese, who is entering his 6th season as the bench boss.

“…Overall, you know, we were pretty happy with the way we played. Opening our season at Oral Roberts, who has pretty much run the Summit League for the last two decades, and then obviously Michigan State, but we have played pretty well the last two weekends,” Barese said.

After a trip to Tulsa, OK, to take on an Oral Roberts program that has won 18 Summit League Championships dating back to 1998 and splitting on their opening weekend, Michigan State wasn’t exactly going to be a walk in the park. But the Warriors answered the task, and with some serious authority.

Finding themselves down 6-2 heading into the top half of the 8th inning the offense woke up after a 14 hour bus trip to the Palmetto State. A four run late game rally saw the Warriors tie the game at six to eventually force extra innings, where once again the bats would come alive for three in the top half of the 11th to take the lead, and see the bullpen hold to secure the win.

The middle day of the weekend featured a double-header and a Warrior sweep to secure a series win. Behind 3-1 and 7-5 victories senior third baseman Joey Porcelli, who was part of the 2018 NE-10 Championship roster, saw the same competitive fire in his team that he has seen across campus in this first D1 year here at Merrimack.

“You look across campus at the seasons some of the other programs like soccer, football and now with basketball, you see what they have done and being successful. For us now, even early on to be able to be a part of that, it just shows we belong. It’s just a great feeling,” Porcelli said.

The success of this past weekend certainly hasn’t gone unnoticed, as now with such a bigger light shining on Merrimack there is an opportunity for anyone with a connection to the school to be proud.

“It’s been fun to see the excitement from the alumni and families, which is more important in that aspect,” said Barese. “So many people have reached out over the last few days, hearing from alumni that I haven’t heard from in a little bit as well as the families getting a chance to see that, it’s really special.”

The Warriors will once again head back to South Carolina this weekend as they get set to take on the Wofford Terriers at Russell C. King Field in Spartanburg. Follow @MerrimackBSB for in game updates, as well as www.merrimackathletics.com for more on all things Warrior Athletics related.