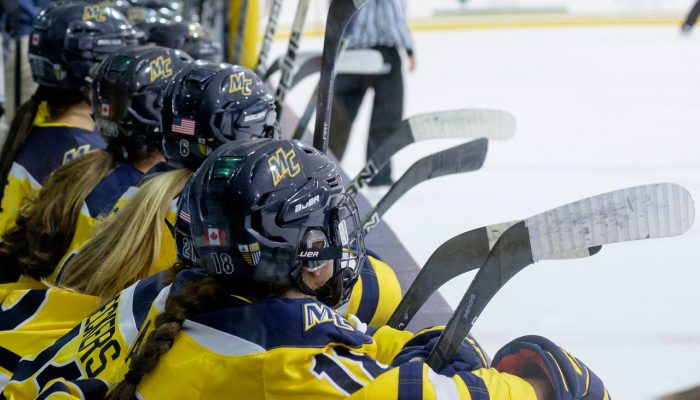 As the Merrimack College Women’s hockey team begins their fourth season as an NCAA team, head coach Erin Hamlen, who is a former USA Hockey goaltending legend, sees a bright future for this young and upcoming team.

There are several reasons to love NCAA Women’s hockey. For the competition, the excitement of games and the talent level of the players. Jumping right into The Hockey East, a Division I conference, in the 2014-15 season was not thought to be an easy challenge. Yet Hamlen was ready to face this obstacle year one despite the lack of maturity the players possessed compared to the bigger schools in the Hockey East.

The 2017-18 team, a talented roster filled with all but seniors, surprised everyone by starting 2-0, beating the Canadian team the Whitby Wolves at home and Boston University on the road. After beating nationally-ranked Minnesota at home, the Warriors proved that despite the lack of time spent as a D1 program, they are lacking nothing in the talent department.

When asked about the strengths of this year’s hockey team compared to recent years, Hamlen notes their maturity, there are 11 seniors on the team, and says that “The team shines with talent, and players who are looking to do nothing but win.”

The Merrimack Women’s Hockey team continuously proves that they are not to be taken lightly.