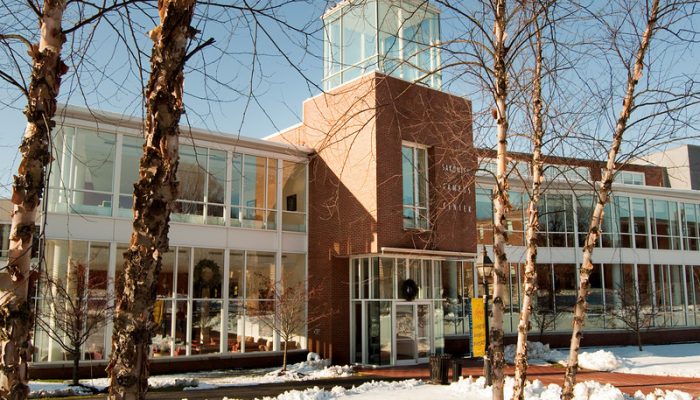 Paige Sorensen, a Merrimack College senior, recently self-designed her own major. As a freshman, Sorensen declared a major in Environmental Studies with a minor in Music. But she realized in the fall of her junior year that she wanted to make music a second major even though it didn’t exist on campus.

Merrimack has had a music minor for about ten years, but never an established music major for students to study. Sorensen created the major herself along with Laura Pruett, Ph.D., Chair of the Department of Visual and Performing Arts. Sorensen has been playing the guitar, percussion and piano since she was four, 11, and 12 respectively. Playing her instruments and singing along to songs that she writes herself has been a part of her life ever since.

Sorensen knew that she wanted to continue taking music classes once she had fulfilled requirements for her minor, but wanted to get credit from taking them. Otherwise, taking those extra classes “would have just been solely for my own enjoyment,” Sorensen says.

Pruett helped put her plan into action. “We discussed the idea of a self-designed major with the component of a senior thesis… we made it happen together,” says Sorensen.

She found ways to incorporate her love of music into her environmental studies classes throughout her time here, even before she thought about designing a music major. During her sophomore year she composed a song called “The Human Impact” as an assignment for her Environmental Ethics class. Sorensen describes it as “very angelic and builds to pure chaos. [It] symbolizes the end of the human race and what will happen if we continue on the path that we’re continuing,” she says.

This is the first time a Merrimack student has majored in music, according to associate Dean of the School of Liberal Arts, Mark Allman, Ph.D. He says in the last 13 years, Merrimack has had over 40 self-designed majors in Liberal Arts. Students have created majors like Economics of Business, Professional Writing, and Graphic Design and Marketing, among others.

Sometimes, Allman says, creating these majors can lead to changes at Merrimack. “The majority of those students [who have self-designed a major] had created a women’s and gender studies major. It was so regular that eventually we formed the Women and Gender Studies program.”

Pruett wishes more students would self-design majors so that they can study what they’re passionate about, just as Sorensen is doing. “Most of the time what [a self-designed major] does is take elements of two different majors or programs and pull them together in some kind of a hybrid,” Pruett explains. “This is different because [Sorensen’s music major] is all from one subject.”

Pruett hopes to see Merrimack offer a music major soon. She says “developing a music major has been something that I’ve wanted to do the entire time since I’ve started teaching here… so I’ve been really intentional about shifting our course offerings towards a bachelor of arts in music.”

Working with Sorensen on her self-designed major has been a catalyst for Merrimack to take steps to offer music as an established major. “This moment with Paige’s self-designed major is a really important step towards that goal, which I now see happening pretty soon, like maybe even in the spring,” Pruett says.

If a student wishes to self-design their own major, they should start by looking at Merrimack’s website on self-designed majors and talk to the chairs of the departments who offer courses relevant to their interests.

“Just because something’s not in the catalogue doesn’t mean you can’t do it,” Pruett says. “All you have to do is ask.”