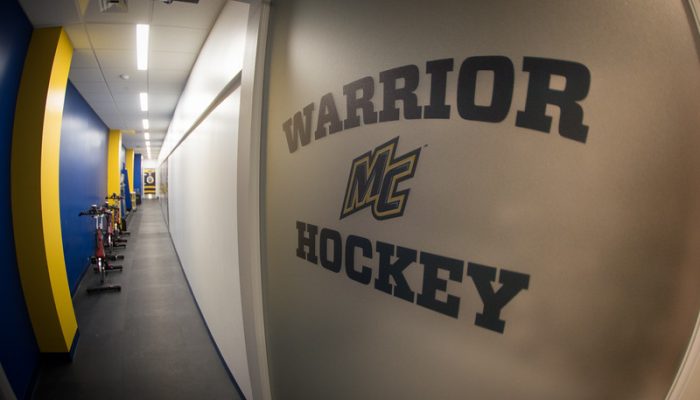 Four players on the Merrimack Ice Hockey team were named captains for the 2018-19 season. Seniors Mike Babcock, Derek Petti and Alex Carle, as well as junior Johnathan Kovacevic were all named to the leadership group. Babcock will be the sole captain, wearing the “C.” As for Petti, Carle and Kovacevic they will be alternate captains, wearing an “A.”

Babcock will be wearing the “C” for the second time in his career. He was captain of the Fargo Force in the USHL (United States Hockey League) before attending Merrimack.

“I was fortunate to be a captain in juniors. I think a lot of what I did then is what I will do now,” stated Babcock. “I take from the good and learn from the bad. Take those experiences and grow from them to help me be a better leader here, now.”

Petti, a Tyngsborough native, will be wearing an “A” this year. He mentioned how important it is to not only have the leadership group lead, but have everyone be leaders. The senior class and junior class will be relied on heavily this season to step up.

“The older guys need to bring it everyday and show the younger guys what it takes to be a warrior,” Derek explained. “All eyes are on the seniors and the juniors, not just the leadership group. It’s going to take a full team effort to come together as a team and make this a good year.”

Carle, the oldest player on the team at twenty four years of age, looks to bring his excitement and energy to the leadership group. He is coming from a heavy hockey background, having both his brothers play at the University of Denver, and knows the importance of keeping the game fun while still getting work done. His older age comes with great knowledge of the game and knowing what it takes to be a winner.

Kovacevic is the only junior with a letter this season. The Winnipeg Jets draft pick brings a more lead by example type of leadership, but can have a big impact on the team when he chooses to speak up.

“I think [Kovs] is a very calm, posed leader, who is soft spoken,” Babcock stated when asked about Kovacevic. “But when he talks, everyone listens.”

The Men’s Ice Hockey team opened their season a few weekends ago at home for two games before heading on the road the following weekend. The Warriors are projected to finish 11th place out of 11 in Hockey East this season, but that isn’t stopping the team from setting high expectations going into the season.

“Our goal is to win the Hockey East Championship, Hockey East Regular Season Championship and the National Championship,” stated Babcock. “We all came here to win championships. Our goals haven’t changed and they are not going to change. We believe in this group we have and it starts this weekend against Lakers.”