Rookie Runners are Heating Up the Meets 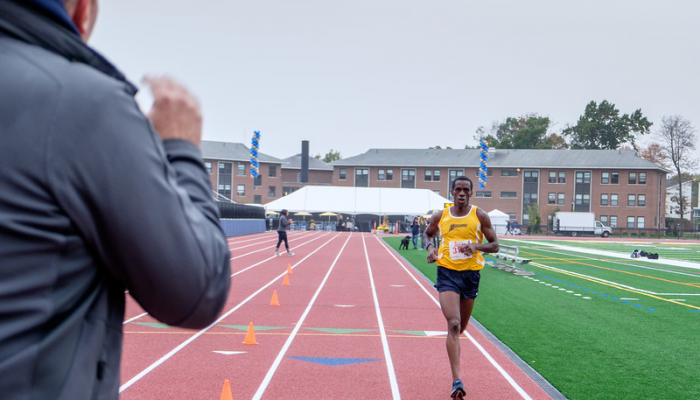 The men’s cross country team had six of their runners place in the top ten. Four women runners placed in the top six overall on the individual leaderboard, grabbing a team title. Rookie TJ Corliss, a freshman, placed first at Codfish with a time of 26:45, leading the Warriors for the second race in a row. John Sava, a senior, also placed second just nine seconds behind at 26:54. Katherine Ferrara, a junior, grabbed the top spot for the Warriors with a time of 19:09. Rounding out the all-Warrior podium was senior Tia Foglietta with a second place time of 19:17 and sophomore Julia Dempsey with a third place time of 19:32.

With a loaded younger class filling up the majority of the roster for both teams, these runners are making their mark and will continue to do so with more experience, sweeping early victories already with seasoned and new athletes all making appearances in the top ranks. Picking up their first team win since the 2014 Shacklette Invitational and a first career victory for Corliss, this strong upcoming class is already changing the program, gaining attention for the team and leaving a lasting impact in the division.

Chris Cameron, Head Coach for both men’s and women’s cross country at Merrimack, speaks highly of all his athletes and is excited about his athletes stepping up individually and as a team.With their sights set on Nationals, the women sit third in the East region, and the men round out to seventh. All about the expectations and process, the team needs to stay consistent, getting out together as a pack the first mile to establish position and then focusing on a hard last mile, mimicking their weekly workouts and tightening up their packs further.

“With my captains John Sava and Noah Davis leading the way on my men’s side and captains Morgan Debolt and Sophie Gorton leading the way for our new members, both teams are making a big amp in the Division, with 12 freshman boys and eight freshman girl’s quickly learning the ropes of college athletics,” said Cameron. He also mentioned how impressed he was with the leap his freshman made to longer college races, and how fast they adapted to the change.

“Yet, as we continue to prepare for races there is always room for improvement, and both the men and women need to tighten up their packs, having their times closer which is better not only individually but in perspective for the whole team’s success,” said Cameron, ready to continue forward with his athletes and grab more titles as the season continues.

Sophomore Kate Fisher finished six at Codfish at 19:37, and senior Sophie Gorton grabbed 11th with the time 19:54, as another freshman men’s runner, Colin Fitzpatrick, finished fourth with 27:02 and classmate Joseph Forest placing sixth with the time of 27:19. Senior Jackie Coscia and freshman Sarah Tierney finished in 20:30 and 20:38, respectively, and sophomore Gunnar Hasselquist garneded the same time as junior captain Noah Davis at 27:31. With a time of 20:48 senior Morgan DeBolt finishes off the top seven for the women Warriors and 23rd overall, as sophomores Shamus Malia and Ryan Sullivan clock out at 27:52 and 27:49. Rounding out the top 20 for the individual standings in Codfish, James Bull and Ben Forest give the Warriors their last times of 27:58 and 28:07.

Corliss, a rising star in the program, had never ran a cross country race before college, and didn’t have any expectations to win. As his third race ever, Corliss contributed to a huge team win as he gets used to the runs and races and giving everything in the workouts.

“As we move forward it will be a goal of ours as a team to step up and tighten up our packs, taking no days off and taking our workouts seriously, since they are so key to our success, Corliss says. “Our team chemistry is at its best, as our captains pave the way and help us push towards a chance to qualify for Nationals.”

The Warriors will be back in a race in two weeks, as they compete in the New England Championships right back at Franklin Park on Saturday, Oct. 6.